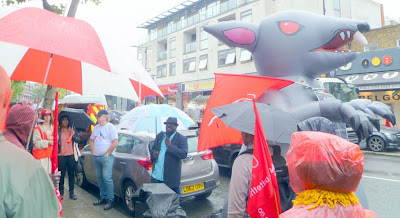 During lunch time today I went to show solidarity with other members from my employer at the Unite picket line outside One Housing Group headquarters in Chalk Farm, North London.

It was rather damp from the rain but a very lively and colourful picket line with even its own PA music system.

One Housing Group (click on the label below for the various posts I have made over the years about this organisation) have a surplus (aka "profit" in the housing association world) of £35.8 million this year. Their CEO has taken a £31,000 pay increase while at the same time they are making their front line care and support workers take pay cuts of up to £8,000. One Housing claim that they are being forced to slash wages due to government cuts. I get this - but the pay and privileges of the Senior Management Team remains the same or even increases? Why can't vulnerable low paid staff have decent protections?

They have now had 9 days of strike action and the last day (so far) of strike action will be on Monday 9 September. The picket line is less than 3 minutes walk from Chalk Farm underground station (Northern Line).