#Lab13 Denis Healey and Stand Up for Labour 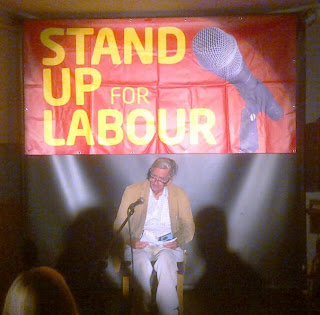 By Monday evening I needed a break from conference fringes and bought a ticket to see the "Stand Up for Labour". On the publicity for the show I had noticed that it had a "Denis Healey" billed to appear. I assumed that this was someone impersonating the former Labour Chancellor and deputy leader.

I never expected for a moment to see that it was actually the Denis Healey who was the first act. He read out limericks to the audience.

He was looking a little frail but appeared to be enjoying himself while performing. It was his 96th birthday recently so as he went off the stage all the audience sang "happy birthday to you".

The whole show was great fun and I would recommend Stand Up for Labour.  The show finished off with Andy Burham MP, who told a modified version of the classic joke about a man going into a pub with a parrot on his shoulder. I won't reveal the details in case he wants to use it again.
Posted by John Gray at Wednesday, September 25, 2013