Newham Council Pension Fund is 100% funded (DB pensions are not dead. They are alive and kicking) 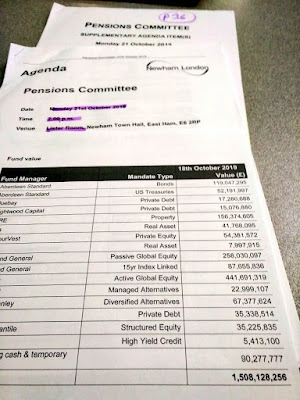 On Monday evening during the Newham Pension committee meeting, I was pleased to read the following item in our "Investment Strategy Update".

This means that for the first time in many years the pension fund has enough assets (shares, bonds, property and cash) to meet all its expected liabilities (the pension promises we have made to members of the fund) at this point of time.

Now with the uncertainty over Brexit, possible recession, future revaluations and a recent unhelpful court case (The McCloud Judgement) who can predict the financial future.

However, what this achievement by Council Officers, Advisers, Fund Managers (and maybe even Councillors) shows is that modern, well run decent pension provision is affordable and achievable in this country.

The Newham Pension fund is a "defined benefit scheme" (DB) In which workers receive a pension based on their length of service and salary. Such collective schemes are not only usually cheaper and more affordable than individual pension schemes but they are far less risky for workers and they usually offer added benefits such as protection against ill health and free life assurance.

For many years such collective schemes have been derided as too expensive for employers and "unaffordable". Most employers have taken the opportunity to close their schemes and instead introduce insecure funds which place all the risk on workers for their pensions. Many employers have also grossly underfunded these schemes, which will mean that their workers will face acute poverty when they retire (if they can ever afford to retire that is or will have to work until they drop).

I hope that the positive experience of the Newham Pension fund (and other Local Government Pension Funds) will mean that the Government and employers will think again about providing decent collective pension provision for workers in the future.
Posted by John Gray at Saturday, October 26, 2019