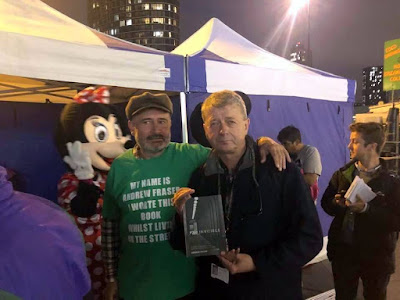 This evening I went with the Newham Mayor, Rokhsana Fiaz and our Council Chief Executive, Althea Loderick to Stratford Broadway to visit the scene of a dreadful murder of a 16 year old boy.

At the same time there was an action near Stratford Station by protesters to mark National  Homelessness week.

As Newham Deputy Mayor, I went to support this event and speak to the organisers of the protest to advise them of the overnight rest centre for any rough sleepers who were unable to use the Stratford Centre since the Police had closed it as a crime scene.

While I was there I met again Andrew (see picture) who is a former rough sleeper who has written a book about his experiences on the street and has also attended meetings of the Newham Homelessness Task Force and told us about his lived experiences.