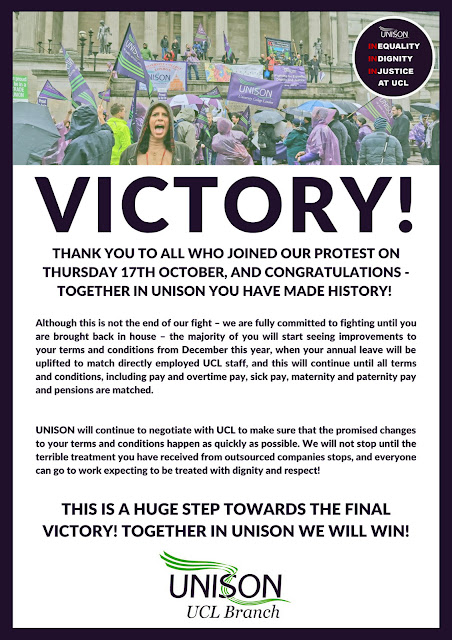 Pay, pension and holiday rights to be upgraded
UniversityHundreds of outsourced UCL staff are celebrating after UNISON secured the same pay, pension and annual leave rights as directly employed workers doing the same jobs.
From 1 December 2019 – as part of a phased retreat by UCL – porters, security and catering workers will receive the same holiday entitlement as directly employed staff, says UNISON.
By autumn 2021 the pay, overtime, pension options and sickness allowances of the 900 outsourced staff will be brought in line with directly employed UCL workers, ending years of unfair treatment, the union said.
UNISON negotiators are working with university managers to speed up the process so staff can benefit before 2021.
UCL will join other London universities – including King’s College London, the London School of Economics, and Goldsmiths, University of London – in employing outsourced and directly employed staff on the same rates.
UNISON general secretary Dave Prentis said: “This is a sensible and humane decision. For far too long hundreds of hard-pressed workers have been forced to watch as colleagues doing the same jobs get better pay, more leave and more generous pensions.
“UCL’s rethink shows the determination of workers to fight for what any fair-minded person can see is natural justice.
“Although we’re nearly there, UNISON will continue to work with university bosses until the final document guaranteeing fair pay and conditions is signed, sealed and delivered.”
UNISON London regional organiser Boyana Petrovich said: “UNISON is committed to seeing all outsourced workers brought in-house. However, we’re pleased outsourced UCL staff will begin to feel the benefits of our campaigning as early as this December.
“This is a fantastic first step that will make a massive difference to staff and their families, just in time for Christmas.”
Notes to editors:
– UNISON is the UK’s largest union, with more than 1.3 million members providing public services – in education, local government, the NHS, police service and energy. They are employed in both the public and private sectors.
Posted by John Gray at Thursday, October 24, 2019