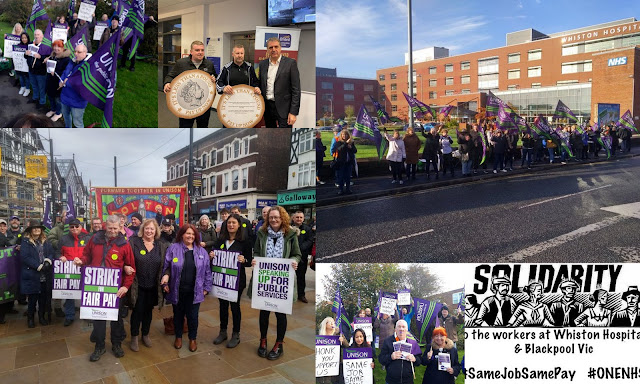 WHY IS THIS IMPORTANT?

We are hospital support staff working for Compass in St Helens & Knowsley and Blackpool NHS Trusts. We keep hospitals clean, cook for patients and keep them safe.

We are paid over £1000 less per year and have worse terms & conditions than some of our colleagues who do the same jobs. That's why we are standing together for fair pay and fair treatment.

Our fellow UNISON members at Liverpool Heart and Chest Hospital won their dispute against Compass and we'll stick together until we're treated fairly in St Helens and Blackpool too.

WHAT DO WE WANT?

We want Compass to commit to ending the two-tier workforce they've helped to create in St Helens and Blackpool hospitals.

We want Compass to pay the full NHS Agenda for Change (AFC) rate of £9.03 to all staff.

We want Compass to commit to full NHS AFC terms and conditions for all staff, including enhancements and occupational sick pay.

We want Compass to commit to ongoing pay parity with colleagues on AFC contracts.
WHAT ACTION HAVE WE TAKEN SO FAR?

If Compass do not offer us what we're owed then we will take further action in future.
HOW CAN YOU HELP?

Please attend picket lines to support us during the upcoming strike days. Pickets will take place at Whiston Hospital and Blackpool Victoria Hospital on the strike days described above.

Please donate to our strike fund. Email nwdisputesteam@unison.co.uk for further details on how to donate.