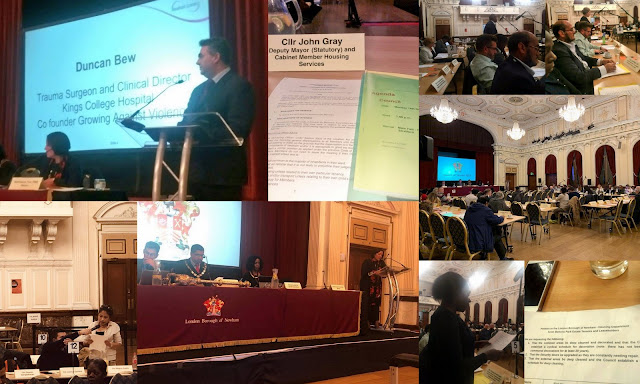 Picture collage from last night's Full Council meeting in the Old Town Hall in Stratford. It was a short but emotive meeting. Starting off with the Newham Mayor, Rokhsana Fiaz, requesting that the meeting has a minute's silence in memory of the young man tragically killed on Thursday just across the road from this hall.

By coincidence, Cabinet member for Education, Cllr Julianne Marriott, delivered a regular report on the excellent exam results that many schools in Newham have achieved this year and innovations such as the Healthy School Street pilot.

There were petitions presented by Councillors on behalf of their constituents (including one from my ward in West Ham presented by fellow Deputy Mayor, Cllr Charlene McLean). A Motion was passed on changes of Council procurement to make it better on quality and enable Community Wealth Building. There was also a number of minor procedural motions and a fantastic first speech to Council by Cllr Beligica Guana on Indigenous Resistance Day.

Our keynote speaker ("Partners report") was Duncan Bew, whose day job is a Trauma Surgeon in Kings College Hospital and also the Co Chair of the Newham Youth Safety Board. Duncan gave a sobering presentation on his experiences as a Trauma surgeon in East London  but also a positive message that things can and will be done in Newham to address knife crime and youth violence.

In the Q&A I asked Duncan whether he thought UK laws on the probation of drugs increased the risk of violent gang crime? He answered that Gang crime was only responsible for 10% of all murders but such crime was strongly linked to economic deprivation and that young people may get involved in gangs and drug dealing since they think it is an "easy" way out of poverty.