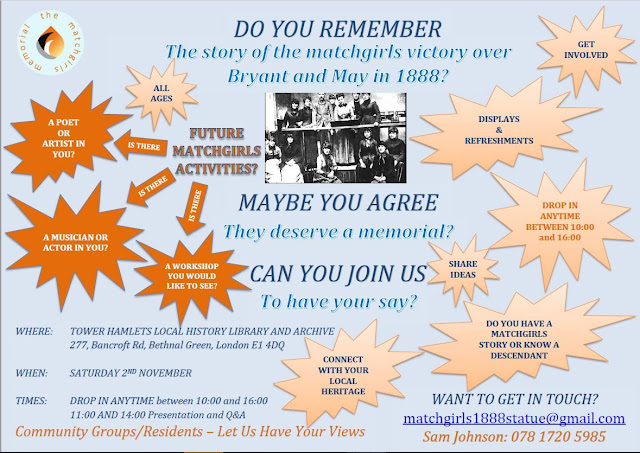 I am a UNISON delegate to the TUC regional Council (LESE) which meets this Saturday and amongst the paperwork I was sent for it was an update on the campaign to save Sarah Chapman's Grave in  Manor Park Cemetery (Newham, East London).

Sarah (1862-1945) was a grass roots trade union leader in the famous "Matchgirls" strike and victory over Byrant & May in 1888 and later a TUC delegate.  She is buried in an unmarked paupers grave in a privately run cemetery which is threatening "Mounding" her grave (to level the ground, remove all memorials and cover with top soil to create more space for future burials).

There is also a campaign to have a statue to honour the Matchgirls whose victory helped laid the foundations for the modern day health and safety, trade unions and the labour movement.

It is now incredible that they had to fight to stop their employer poisoning them with white phosphorus, which could result in workers developing a condition called "phossy jaw",  which had a mortality rate of up to 20%.

Sarah's great grand-daughter is helping to lead both campaigns. I have emailed to offer my support (and I have posted previously on this here and here)

There is a petition still open https://www.change.org/p/minister-of-justice-save-sarah-chapman-s-grave-a-leader-of-the-1888-matchgirls-strike-trade-union-heroine and an open day (see main picture) in Bethnal Green on 2 November 2019.

For many years I worked in Bow near to the Byrant & May site (which has now been turned into residential flats which commuters should recognise while on the train into Liverpool Street)  as a housing officer and I used to manage Annie Besant Close which was named after another leading figure in the Matchgirls strike.
Posted by John Gray at Wednesday, October 16, 2019