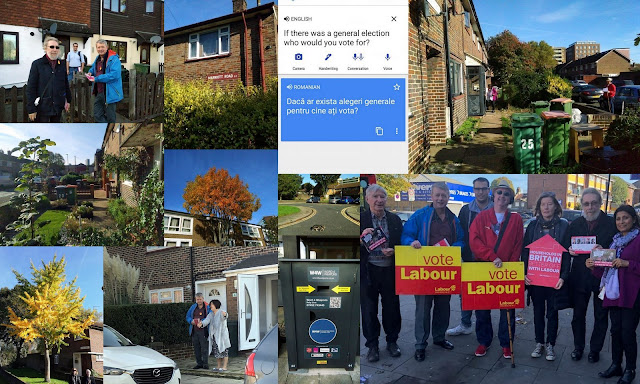 This morning we went door knocking in West Ham ward. It was a lovely blue sky, sunshine Sunday after a very wet and rainy Saturday.

The feedback for Labour was, as usual in Newham very positive, but we are, I think, taking a hit from Remain supporters, who are using our apparent ambiguity over Brexit to voice wider concerns about the Party.

However, come the real General election (I have given up guessing when but likely to be soon) can we win these voters back to Labour (and convert the others necessary to win) with another pragmatic but radical manifesto? Hopefully yes.

While knocking on doors I had a sensitive conversation with a man whose father had recently died and had just moved his Mum into a nursing home. He was clearing the family home to hand it back to the Council.

I also got very firm representations from a resident about a number of issues especially parking (see college bottom left).

We canvassed in Paul Street E15 where there is a Bin for knives outside the Salvation Army office. Also, Marriott Road, where there was a V2 Missile attack during World War 2 which killed 29 local residents. I believe that the road was named after firefighter, Harold Marriott, who was killed nearby during the Blitz in 1940.

3 out of the 7 canvassers were called "John" (see us on top left of college) but the young "John" showed all of us up, by being the only one to use "google translate" to explain to residents who did not speak English, why we were there. What a great idea!
Posted by John Gray at Sunday, October 27, 2019