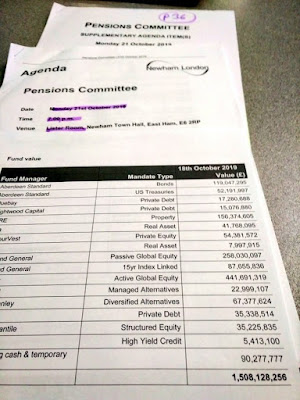 This evening I attended the Pension Committee in East Ham Town Hall during which Council officers reported that for the first time in living memory, the staff pension fund was 100% funded with a record £1.5 billion of assets.

This means that at this moment, all the pension liabilities/promises to our staff (and those who are retired as well as those may no longer work for Newham but are waiting for their pension) are backed 100% by real assets (shares in companies, government bonds and cash in banks etc).

I have been a member of the Local Government Pension Scheme since 1993 and a member of various pension committees, trusts and boards since 1996.

This is the first time ever that I have been involved in any pension scheme that is fully funded (usually it has always been in deficit which means that that there are less money than liabilities/pension promises).

While there is a standard 3 yearly review due soon on the way we calculate liabilities/pension promises, which could change the situation (and of course Brexit) I think we should thank Pension committee officers, advisers, fund managers and committee members for this incredible improvement in our Council pension fund finances.

I will also personally call out all the dreadful untruths and attacks on such defined benefit pensions schemes in recent years, saying wrongly they are unaffordable and outdated, that has resulted in thousands of decent pension schemes closing and millions of British workers losing out.
Posted by John Gray at Monday, October 21, 2019