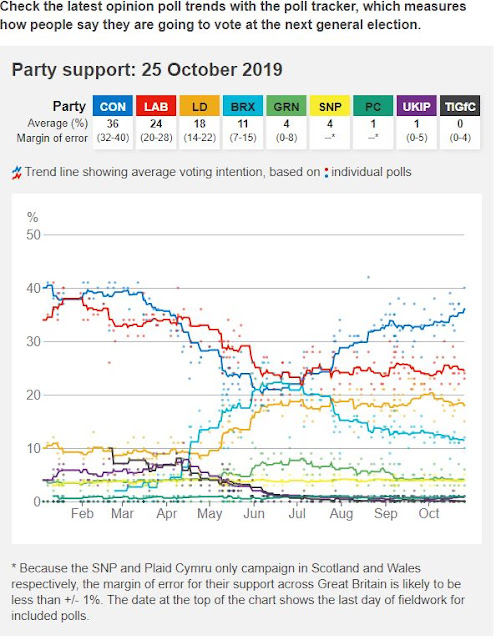 As you can see from the BBC poll checker above, we appear to be well behind the Tories (36% to 24%) but politics is so fractured at this moment in our history no one really knows what will happen. Note this report from the BBC during the 2017 election.

"Polls at the beginning of the 2017 election campaign pointed towards an overwhelming Conservative victory. They were consistently hitting around 45% of the vote - sometimes even higher - with Labour down at around 25%".

The Tories in 2017 ended on 42.4% and Labour at 40%. Never forget we still lost but going from 25% to 40% shows we can change the hearts and minds of voters. Of course due to the UK "first past the post" electoral system, the share of the vote is not always the decider.

However, a good campaign and another excellent manifesto could get us over the line and we could win. But we are going to have to work very hard and show far more discipline than we have recently.

Today we had an election planning meeting for West Ham CLP. We have a plan to re-elect our excellent MP Lyn Brown. I am the Parliamentary Agent for this election (my 4th time as Lyn's agent)

I understand that all triggers have now been suspended and existing MPs (not subject to discipline processes) will be automatically endorsed as Parliamentary candidates.

We are also going to support Labour candidates in marginal seats elsewhere in London (and maybe even beyond). We have to win the marginals to form the next Government and elect Jeremy as our next Prime Minister. It is as simple (and difficult) as that.

Remember that most of the national media is against Labour and that the Tories will always outspend us during this campaign. Our major weapon is our 500,000 members (1800 in West Ham alone) and our millions of trade union & other affiliates. If we can mobilise them to campaign effectively for Labour in the marginals we can (and will) win.
Posted by John Gray at Tuesday, October 29, 2019

A Corbyn-led government would 'pose a danger to Jewish life as we know it' (Rabbi Dr. Romain), on the day the Jewish group affiliated to the Labour Party declare they will not campaign for Corbyn... strange bedfellows you have John!

I respect their views but do not agree. I am horrified that anyone thinks that this is a real threat and the Labour Party must step up and do more to reassure everyone that they are tackling these issues robustly.