West Ham Labour campaigning for London Mayor, Sadiq Khan & getting ready for the next General Election 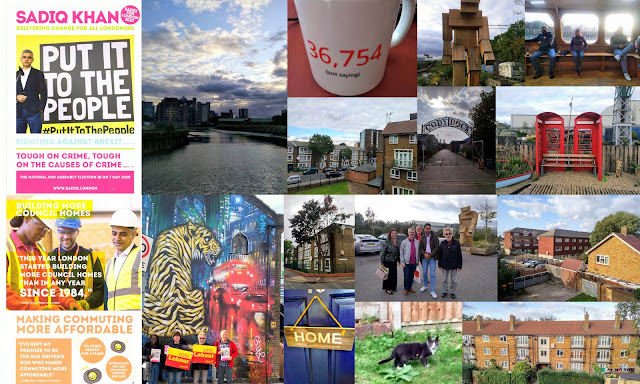 A busy long weekend delivering leaflets in various parts of the borough for the re-election of Labour London Mayor Sadiq Khan in May next year and promoting Labour to our residents.

Saturday and Sunday in West Ham ward with activists and with local Cllr John Whitworth & Cllr Charlene McLean. We are also had a young pioneer with us and a ringer from East Ham, Cllr Susan Masters, who had been attending a "Save NHS" meeting nearby.

On Sunday afternoon I went out with a team led by our MP, Lyn Brown to Canning Town North. Afterwards we had a drink in Cody Docks and watched a marvellous sunset.

This morning I was in my home ward, Forest Gate North, with Gill delivering to local streets including the address of a recent former leader of UKIP, who would not appreciated the front page of Sadiq's newsletter (top left).