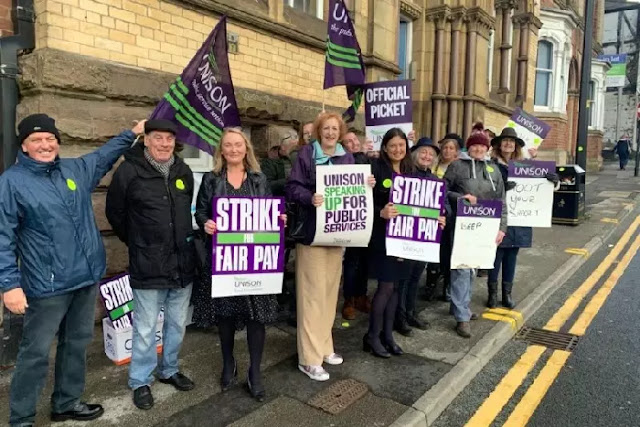 Drug and alcohol support workers employed by London-based charity Addaction in Wigan and Leigh have intensified their strike action in a dispute over pay.

Thirty staff are beginning three days of strike action today (Wednesday) in their third round of industrial action within the last six weeks over what they say are Addaction’s broken pay promises.

The striking workers will hold a public rally at 12noon on Friday 11 October at Market Place, Wigan, WN1 1QS.

The staff were previously employed by the NHS but the service, commissioned by Wigan Council, was transferred to the national charity, which has come under fire for its handling of the dispute.

Workers continued to receive pay rises in line with those of NHS employees and were given assurances by the organisation’s managers this would continue into the future.

But when the 1% pay cap in the NHS was removed from April 2018, Addaction refused to implement the promised wage rise. The decision, which will cost each support worker around £1,000 per year, was taken without any consultation or discussion with staff.

After exhausting the internal grievance process, staff were balloted by their trade union UNISON and there was a 100% vote in favour of strike action.

To date, three rounds of Acas talks have yielded no resolution to the dispute- which has rumbled on since August. Drug and alcohol support workers claim that Addaction bosses have failed to engage meaningfully with the negotiation progress, refusing to share or discuss information about the cost of resolving the dispute.

“Addaction have let down their hard-working staff and are now withholding a long-overdue pay rise from support workers who deliver vital services to the community in Wigan and Leigh.

“What’s more, Addaction bosses have attended three rounds of talks with no intention of resolving the dispute, and in fact have done all they can to delay, divert and distract from the issue at hand.

“The employer’s defence seems to be that the promised pay rise would be ‘unfair’ on the group of staff it pays even less than those who used to be employed by the NHS. There is a simple solution to that problem, which is to pay all Addaction staff the full NHS rate for the job.

“Public service workers who have been outsourced should not be out-of-pocket. The people of Wigan and Leigh will not accept a London-based organisation driving down pay and working conditions in their local area. If that is Addaction’s intention then they should hand the contract back to the Council.”

“We have been overwhelmed by the support we have received from the local community in Wigan and Leigh including from local people who use Addaction’s services.

“We did not plan to go on strike and we did not envisage taking six days of action, but we voted unanimously in favour of striking because we know that we have been treated unfairly. The support we have received from communities across the North West has only served to further strengthen our resolve.”

Local MPs are in support of the workers. Leigh MP Jo Platt said: “Drug and alcohol support is an essential service across the borough.

"It not only supports people to come off drugs and alcohol, but it treats the underlying causes, assisting them with mental health concerns and helping them get into employment and turn their lives around. Their services are needed now more than ever.

"You only have to walk through our towns to see the effect that this has. Austerity, poverty and addiction go hand in hand. It ruins lives, it fuels crime and affects communities.

"Addaction should know better than to risk their crucial service. The way the staff have been treated is appalling. For a promised pay rise to be reneged on is totally unacceptable. If Addaction cannot afford the staffing costs, they should never have bid for the contract in the first place.

“I will be working with colleagues from across the borough as well as trade unions and staff affected to rectify the situation and honour the promises made to the incredible workers who are losing out through no fault of their own.”
Posted by John Gray at Friday, October 11, 2019