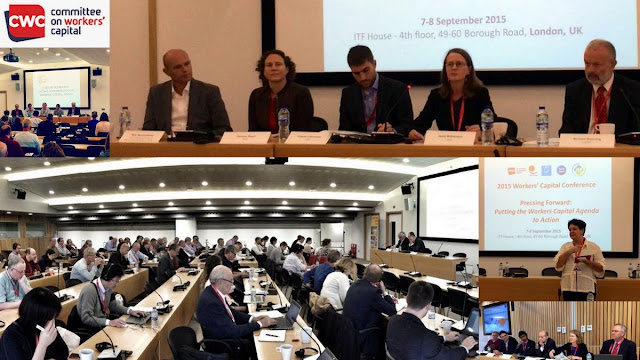 This is a little late. I have posted here and linked here on the first day of this global annual conference for trade union pension trustees and organisers that took place earlier this month.

(On my https://twitter.com/grayee account I tweeted on the presentations and speeches which I have now used to write this post).

The 1st plenary was on "Embedding pro-labour practises & policies for responsible investment". Willem Noordman from the Dutch Pension Federation recognised that engineering unions would have a different view of arms production than others but all unions have plenty in common. There is a real dilemma that if we disinvest from a company because we don't like their practises that we lose all influence over them.

Tom Croft, from the USA Steel Valley Authority in Pittsburgh pointed out that the "S" in "ESG" principles (Environmental, Social and Governance) is too often forgotten.

Pension trustee and national officer, John Neil, from Unite spoke about the Trade Union Shareholders Organisation (TUSO) in the UK. Trade union staff pension funds in the TUC, UNISON, Unite and the ITF combine collectively to make sure that all the shares they own are voted in the interests of "pro-labour" at company AGMs (such as the rogue UK company "Sports Direct" the following day)

A number of international speakers mentioned TUSO at the conference and that they hoped that something similar would be set up in their countries.

I asked the question is there evidence collated of "pro-labour" companies that have proved to be long term good investments that we can show our trustee Boards? Tom Croft responded that in the USA there are certain Private Equity companies that have humanely restructured firms & saved jobs.

Next Janet Williamson from the TUC chaired a panel on 2022 World Cup construction deaths in Qatar.  Gemma Swart from the ITUC spoke about the modern day slave camps in Qatar and that investor pressure over reputational risk can bring about change since the whole country is essentially a family business.

Roel Nieuwenkamp from OECD pointed out that they have introduced binding guidelines on contractors including supply chains with a grievance procedure. "Soft law with hard consequences". He used an example of a complaint by a NGO against Formula1 over human rights in Bahrain and there could be a similar one against Fifa over Qatar.

Hugues Letourneau  from CWC on their human/labour rights campaign in Qatar points out that there has been 279 Indian migrants deaths so far. They are putting pressure on UK and French construction firms via "investor letters".

Cllr Richard Greening from LAPFF  spoke about their engagement with companies exposed in media working in Qatar at AGMs & face-to-face meetings.

(after this session I had to go to a work meeting and missed the debate on infrastructure investment which I understand was pretty heated at times. Some delegates believed that such investment was being misused to privatise public services)

I came back to hear Nick Robins from UNPRI enquiry on the "Design of a Sustainable Financial System".  He believed that there was evidence of a "quiet revolution" in Green investment despite agreeing the Governor of the Bank of England that there was a "tragedy of horizons".

Then 'Labour Standards in Sustainability Rating: How well they incorporated?' Chaired by Elizabeth Umla.

John Jarrett from "FTSE for good" index explained how they did their ESG research and how core Labour standards from all companies are assessed including the supply chain.  Antti Savilaakso from MSCI admitted they have a somewhat similar method to FTSE. They have 130 analysis serving 900 clients. Their key issue is to decide whether bad company behaviour is a one off or structural?

Keeran Gwilliam-Beeharee from Vigeo said they do things differently. They start with the four core ILO standards. Governance issues are the best reported but Labour issues have a low coverage and there is decreasing information on it.

Mario Enrique Sanchez Richter, CCOO trade union economist spoke about his report on the sustainability of rating agencies and how well do they measure? His conclusion was that they do not measure very well.

Final speaker was  Brian Daley from ACTU who stated bluntly that he had not seen any evidence that Labour/Social ratings were actually used by fund managers or advisers to make buy or sell decisions.

In the Q&A Keeran responded to a question on why Labour issues are not being covered by saying that Governance issues such as corruption are seen as more important and lack of investor pressure.

I asked the panel whether rating agencies could give evidence of Companies with good Labour ratings having better long term performance? If they did this would this increase demand for such ratings? John replied that he was not aware of such evidence and agreed that Green and governance issues tended to "crowd out" Labour issues. Brian responded that we should be asking these questions and this should be at the heart of what trustees do.

The closing session was first a video from Liz Shuler, AFL-CIO & CWC co-chair on building an economy & retirement future that we can be proud of. Then final remarks from ITUC General Secretary Sharon Burrow, who said we want rights over our capital but we also want sustainability. While we respect workers in the carbon industry there will be no jobs in a dead planet.
Posted by John Gray at Monday, September 21, 2015