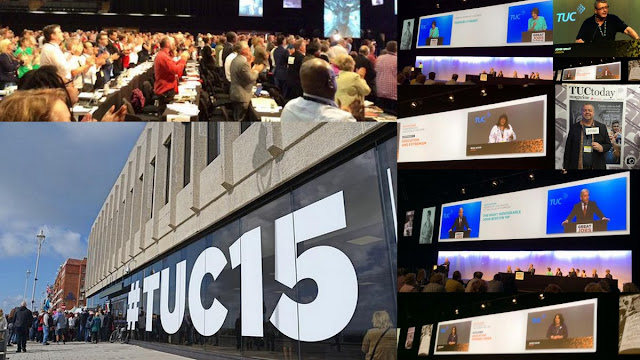 Apologies for lateness but this is a snapshot of day 2 of last weeks TUC Congress (Monday) from a UNISON delegates point of view.

Our first Congress guest speaker was John Bercow MP,  the Speaker of the House of Commons (and of course a Conservative MP). He thinks trade unions do great work ensuring fairness at work! He was entertaining and actually very supportive. He claimed that he was not the smallest ever Commons speaker in height - since a number of his predecessors had their heads chopped  off.

His take off of Tony Benn (I thought at that the time this is risky) actually worked and he made Congress laugh. He admitted that when he was younger and very (very) right wing, we would not have wanted him to have been here. When he left he had to go back and act as Speaker for the Commons debate on the (anti) Trade Union Bill. Shame none of his Party colleagues felt able to oppose its 2nd reading even though the more sensible realise that it is fascistic and a breach of human rights".

There was a genuine standing ovation for TUC General Secretary, Frances O'Grady, after her speech to Congress.  She calls on Jeremy Corbyn to get stuck in, unite the party & win the next General election.

During the day we heard more about new Labour Leader (JC) appointments to the Shadow cabinet and was really pleased to hear that John Healey had been appointed Shadow Housing & Planning minister. I will look forward to inviting him back to my branch Labour Link AGM to speak.

Manchester UNISON, Rena Wood, tells it as it is about the Government "Prevent" programme in Composite 11 on "Education & Extremism".

Birmingham nurse and UNISON delegate, James Anthony, moves motion 33 on "English decentralisation & trade unions". He ponders the "threats & strengths". Seems to me to be more threats to local democracy if Executive Mayors are imposed when they are not wanted and inadequate checks and balances on their powers are in place.

In the afternoon I moved the Composite on the Housing Crisis on behalf of UNISON and after close of Congress I went to the UNISON fringe on the "Real Debt Problem".

(apologies also to any UNISON colleagues who spoke who I have missed out)
Posted by John Gray at Thursday, September 24, 2015