"Future of Trade Unions and the Labour Party" 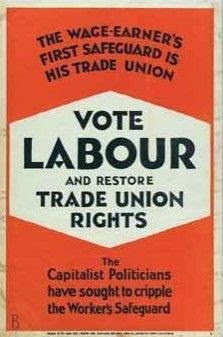 Last Thursday I was asked to speak to Shacklewell Labour Branch, Hackney North CLP on trade unions and the party by my blogging comrade, Dave Osler.

There was a little bit of a mix up with the room booking in the local community centre and we ended up at Dave's and his partner Stroppy (daughter of a former Newham Labour Group Chief Whip) apartment, drinking tea and eating their biscuits amidst classic guitars, bags of clothes destined for Calais refugees and bookshelves of "Trotporn" (Dave's description).

I explained that I was a UNISON activist and a member of its NEC and a Labour Councillor in the Peoples Republic of Newham and this talk was in a personal capacity.

I started with one of my favourite stories about the relationship between Labour and trade unions. Famous union leader, Jack Jones, was once asked whether he thought that strains in the relationship would ever lead to a divorce? He thought about this for a moment and then replied "Murder yes, Divorce Never!"

The trade unions formed the Labour Party as its political wing because it realised it needed Parliamentary protection. The relationship has since ebbed and flowed but the tension between trade union and other activists has been there since the beginning. The trade unions lost control of the party leadership as far back as 1911, which resulted in cries of betrayal even then.

I believe that despite the strains, the trade unions and the party need each other even more now than ever.

The union movement is definitely under threat as never before. The current Tory Reform bill will make industrial action even more difficult and hit membership levels. The unions need legislative protection and the Party needs funding and the political legitimacy that union affiliation and participation provides.

Both wings of the Labour movement family need to raise their game.

The unions need to understand their role and explain things better. As important as personal trade union representation is (and if you are being bullied at work or at risk of losing your job it is vital), membership is not just an insurance policy if you get into trouble at work. Collective bargaining is its number one role. Negotiating with employers about your pay, pensions, employment policies, sickness and holiday benefits is absolutely key.

We also need to recognise that the traditional Anglo-American model of trade unionism is not working and we should look again at other more successful models such as in Germany and Scandinavia. Here unions have greater density and more influence with employers and governments.

In other countries unions also offer real work related benefits such as pensions and employment services, which makes them more relevant to workers. After the second world war British trade unions were offered the opportunity to run UK employment exchanges. They refused.

Unions have also got to understand that just waving cheques at the party is not enough. Trade union members need to get directly involved in their local parties as well as regional and national structures. They need to be in positions of responsibility and advocates of unions and workers' rights within the party.

The party also needs to understand that unions still need political protection from employers and the courts.  The threat and ability to deliver strike action (as a last resort) is as necessary now for the union movement as it was in the past.  The strength of a union up against powerful employers is in its ability to stop work taking place.  If it is unable to deliver strike action due to restrictive laws then the employers will nearly always win and treat workers accordingly. This is one of the main reasons why we have had decades of worsening pay and conditions for workers in this country.

We have to have a more equal playing field between workers and employers rights. The party must provide protection for unions.

Equally, there are many parts of the UK economy such as the care sector where employers are so small and fragmented that it is practically impossible for unions to organise. Wage councils for employers and unions to bargain over pay and conditions should be reintroduced.

Labour needs to attract workers with policies that are directed at the modern UK workplace. I remember being really pleased to attend one of the party policy launch events last year on plans that promised to give employed and self employed workers greater benefits if unemployed or sick. These promises would have reminded workers that the Party of "Labour" was still their Party. Yet these policies seemed to just disappear from the manifesto.

Then followed a pretty wide ranging Q&A not only with me but amongst branch members sharing their own thoughts and experiences about unions and the party.

I really enjoyed the experience and felt at home in this Hackney branch meeting as much as I do in West Ham.  London Labour parties often live in little "bubbles", so it is good to take part in this type of discussion and I hope that some of those present would come to my branch to present about a speciality that they know about.

(Mind you, I suppose I may have to draw a line on a meeting about "trotporn").
Posted by John Gray at Sunday, September 06, 2015