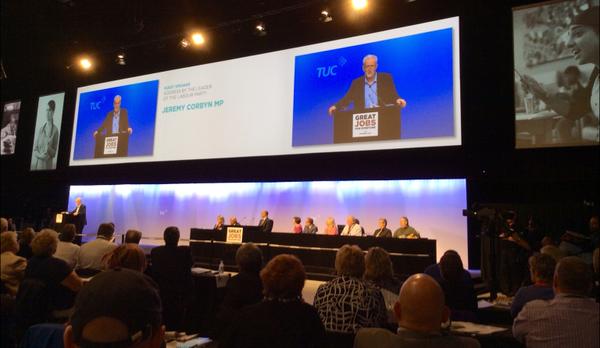 Despite being elected as Labour Leader only four days ago, Jeremy Corbyn, travelled down to address Congress. When he appeared there was a genuine standing ovation before he said a word. The former NUPE official (a founder union of UNISON) started his speech by declaring that he has always been and sees himself as a trade unionist.

He announced that the Labour Party have had 30,000 new members since Saturday. Labour must become inclusive and welcoming.

After being elected he went to the "Refugees welcome" rally in London and the following day to a event in his constituency on ending the stigma of mental health.

His shadow cabinet has more women than men. A first in the UK.

He has appointed a shadow minister for Housing, John Healey, to deal with the "housing crisis". The "free market is not delivering" and there needs to be a "mass Council house building programme".

Jeremy wants the Party and the Labour movement to be "more democratic". More votes were cast for him than twice the total membership of the Tories.  We need to make policy together in this digital age and let everyone bring forward their views. If they are involved then people will own the policy and work to get it implemented.

He wants to go for the election in 2020 with no surprises but instead in 2020 offer certainties.

Jeremy reminisced when as a NUPE trade union official he asked for help in negotiations over time and motion arrangements from a union member who was good at betting. Since he knew the member would be naturally good at rapid mental arithmetic. His point was that ordinary people have talents. He then attacked the "elite who despise those who don't look or sound like them".

He sees trade unions as "an organic link" with the Party and praised the strikers from the National Gallery in London who were resisting privatisation (and also in the stalls at the back of Congress).

The Trade Union Bill was the Tories "declaring war on organised Labour". They claim to be champions of deregulation but the one thing that they want to regualate are the trade unions! It is as one Tory MP has described "a strategy of General Franco". When he is elected he will repeal this bill if passed.

Jeremy believes that the Bill is also contrary to Article 11 of the United Nations Human rights Charter and the International Labour Organisation conventions. Criminalising picketing? restricting free speech on social media? "What kind of intrusive society are they trying to create?"

We have to protect trade unionism. You get better management where the unions are strong. Where unions are weak you get poor job security and worse conditions. Why don't the Tories modernise balloting of members by allowing union workplace ballots to take place?

Why don't the Tories believe that workers should have a political voice? Why are they happy to accept hedge fund money yet are obsessed with the cleanest money in politics. That from the unions.

The welfare reform bill is disastrous and will have appalling consequences. People are committing suicide because of past reforms.

He has to leave after this speech to go back to London and vote against the bill to cut tax credits. Charities say that these cuts will cost a typical lone parent £1200 per year.

The Tories call us "deficit deniers". But they spend billions of pounds on tax breaks for millionaires. They are "poverty deniers". Austerity is a political choice.

Jeremy finished by pointing out that we are a rich but deeply unequal country and if he is elected he pledges to do something about it.
Posted by John Gray at Tuesday, September 15, 2015