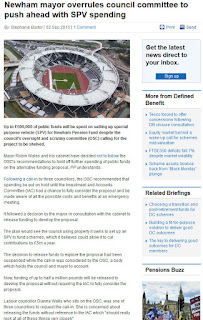 Check out this report in yesterdays "Professional Pensions"about Newham Mayor, Robin Wales, overturning the recommendation of the Overview & Scrunity Committee, that no money should be spent on a proposed "Special Purpose Vehicle" (SPV) until it had been fully considered by its Pension Committee. The funding to "develop the proposal" will now go ahed.

The Overview & Scrunity Committee had voted 5:1 for this pause before spending up to £500k of public money. The former Chair of Newham Pension Committee, long serving and respected Councillor, Winston Vaughan, had also supported this recommendation not to go ahead.

If the Newham Pension Committee later decide that they do not want to go ahead with this SPV proposal then the money could be wasted.

Newham Councillor and Scrunity Chair, Dianne Walls is quoted in the article as saying  "..it is important to look at the proposal in more depth rather than "spending lots of money without due process".

She said: "It's a matter of principal, mainly because there's a lot of decisions made at cabinet and mayor level that have not been open and haven't been scrutinised properly."

She added: "As we've seen in the past, when decisions are made in haste or without due process, then we make mistakes and we lose money. This is not to say that this actual proposal is wrong - we just don't know - we need to look at it very carefully before we commit half a million pounds."

At a time when the council is being forced to make £50m in cuts, she said that spending public money without investigating properly raises the risk of making costly mistakes, which the council "cannot afford to make".

Call-ins are very rare, with Walls saying only two have been made by Newham's OSC in 12 years".

Check out previous posts on this proposal (Warning: more than 140 Charactors)