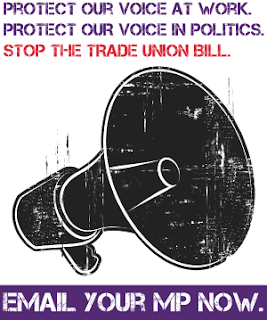 The Government will on Monday (14 September 2015) publish a Parliamentary bill that will attack trade unions ability to defend and representative their members.

This is probably one of the most pointless and even spiteful pieces of anti-trade union legislation ever.

The exact detail has not been released but according to the official government consultation paper it could :-

2. Ban strikes even if a majority of workers vote for it (also  undermining the principle of democratic elections in our country)

4. Allowing employers to use US style agency thugs as scab labour to break strikes.

5. Stopping union health and safety reps from being sufficient given time off to prevent accidents, illness and violence at work

Even the professional body for HR in this country, the Chartered Institute for Personal and Development has attacked the bill:-