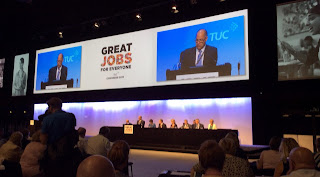 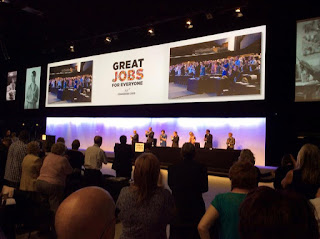 This post is a little late but I had to prepare for a speech on Housing as well as some urgent work related union stuff today. Above are some pictures from the first day of this years TUC and some brief comments I posted on twitter and Facebook.

The Presidents address by Prospect union national officer, Leslie Manasseh, was interesting and thoughtful. He thinks that "our aim should be not to survive but to thrive and make a difference". To do so "we must have an honest debate and take stock".

I was pleasantly surprised to note that that early on there was some polite but open disagreement and debate on the conference floor about partnership arrangements between unions and employers.

Former Postman and CWU activist, Jim Kennedy, who is now also the Chair of the Labour Party NEC gave the traditional fraternal address to Congress. I saw Jim on Saturday give the result of the Labour leadership election at the Special conference in Westminster. (By coincidence Jim is related to my cousin by marriage)

Motion 15 on "Fair Internet for Performers" made me think. Why do musicians only get £0.46 out of every £9.99 per month subscription to Spotify?

1st Unison speaker so far at TUC Congress was, Becky Tye, from our Eastern region who spoke on social care (she is the branch secretary of Broadlands where many of my union members who work in East England belong to her branch)

There was a great speech by Musicians Union activist & Redbridge Labour activist, Barbara White, on "why the arts are a public service".

Congress finishes for the day with a standing ovation for jailed Colombian trade unionist Huber Ballesteros following the showing of a video from him smuggled out of prison.

I was too tired to go to any fringes but the Unison delegation did meet up at 7.30pm for our conference social.  A good time I think was had by all.