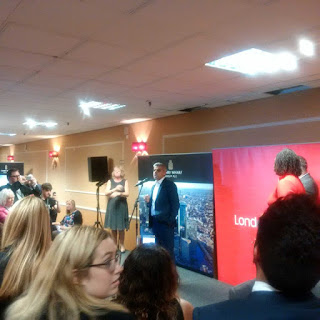 After arriving at the hotel in Brighton and picking up my delegation pack from unison office, I went to my first conference event, the London Labour Party reception.

This is the annual shin dig for London delegates and Party members. London Labour Chair and Assembly member Len Duvall opened the reception.

The guest speaker was of course London MP and newly elected Labour leader, Jeremy Corbyn.  The meeting was packed and when Jeremy arrived he took ages to make his way through the crowd as he stopped to greet and speak to people. I managed to tease him for not turning up to our London Unison Labour Link meeting last week to give his quarterly Parliamentary report.  Jeremy being Jeremy, he sincerely apologised and said he will try and attend a future meeting. I said we would not denounce him on this occasion.

He gave a rousing and even emotional speech which went down well. I am trying to work out when the last time a London MP was Labour Party leader.

Dawn Butler MP spoke about the successes that London Labour had in May and introduced our new MPs.

Unison regional secretary Linda Perks introduced the next keynote speaker, Labour London Mayoral candidate, Sadiq Khan. His election next May as Mayor will be crucial to the Labour recovery.

During the reception I was able to join in with some fairly heavy duty lobbying about Housing Associations attempts to do a dodgy deal with the Government in favour of Right-to-buy and rat out local authorities. I hope that delegates will bring this up with CEOs at the conference fringes sponsored by Housing Associations.

Afterwards a very mixed bunch of us from Newham and a number of other CLPs went off for a meal to carry on chatting, arguing and (occasionally) gossiping.
Posted by John Gray at Sunday, September 27, 2015