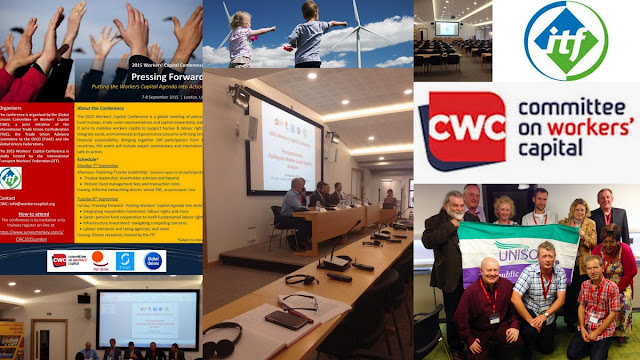 I was there as a UNISON trade union pension trustee alongside a number of our lay activists and national officers (see picture right).

This annual conference is the international forum for trade union and pension fund trustees on the stewardship of workers retirement funds. Trade union trustees sit on the boards of pension funds worth in total $32 trillion (I think this is $32,000,000,000,000!). Which is an eye watering amount of money and a huge responsibility.  The aim of the conference is to promote decent work, a sustainable future and secure retirement for workers.

It is great not only to meet and share knowledge with trustees from all over the world but also it is an opportunity for trade unionists to do what they do best - work collectively in the interests of all our members.

The conference theme is "Pressing forward: Putting the Workers Capital Agenda to Action".

You can check out my tweets on the first day of conference here https://twitter.com/grayee. I will post further on the conference which ends today.
Posted by John Gray at Tuesday, September 08, 2015