"Unison has done so much for working women" 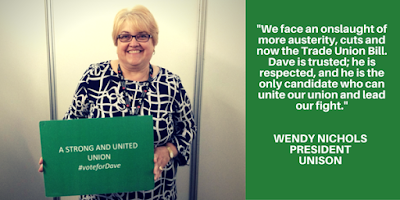 UNISON's President Wendy Nichols has responded below to a bizarre (and "untrue") attack on the union in the Guardian last week.

When I think of all the very strong and influential women in UNISON the idea that they are being "side lined" is frankly laughable.

"Women do indeed make up three-quarters of Unison’s membership, but far from being a union whose “upper echelons continue to be dominated by men” (The Labour movement sidelines women all the time, 12 September), women play an active part, including throughout its top tier. Three out of the five assistant general secretaries are women. Two-thirds of Unison’s presidential team are female, as they are every year, because of rules steered through by Dave Prentis, when he was deputy general secretary at the time of the union’s creation.

Two-thirds of the NEC, Unison’s governing body, are women, as they are on all the other committees that shape the direction of the union. Similarly, eight out of Unison’s 12 regions are headed by women.

Not bad going for a union whose leader apparently sees gender issues as “divisive”.
Unison has always stood up for women, not only those who are members, but women in wider society too. For example, it’s Unison that is challenging the government’s employment tribunal fees, which have led to a virtual collapse in sex and maternity discrimination claims. The union is now taking its fight to the supreme court to make sure that all women are able to confront workplace injustice.
Given the insidious rise in sexism and misogyny in our society, Deborah Orr might have been better placed speaking to someone like myself who knows just how much Unison has done for working women. Then she might have been able to mention the positive measures that have been promoted by Unison under Dave Prentis’s leadership, instead of denigrating them.

Update: Check out this Unisonactive post http://unisonactive.blogspot.co.uk/2015/09/women-in-unison.html for more stuff on Women in Unison
Posted by John Gray at Saturday, September 19, 2015