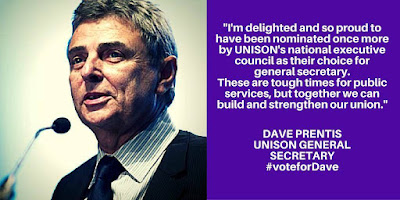 Nominations opened last week for the election of Unison's next General Secretary.

The National Executive Committee (NEC) of UNISON met on Wednesday and voted overwhelmingly(2:1) to nominate and re-elect Dave Prentis.

The NEC is the Parliament of UNISON (outside our National Conference) and is made up of lay member elected representatives from all over the union.

The Northern Ireland regional council has agreed to nominate him and the National Disabled Members Committee has announced its endorsement.

Check out Dave's key pledges here http://www.votedaveprentis.org.uk/pledges/ and encourage your branch to nominate him.