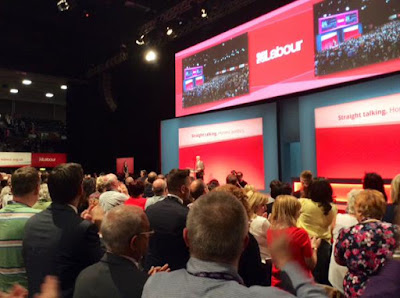 Despite being a delegate (and in theory having a reserved seat) there was still a massive queue for us to get in for the "Leader's speech".

The atmosphere in the hall itself was one of anticipation and a genuine curiosity about what Jeremy would say and how he would deliver it.

It was  a lovely touch to have him introduced by an articulate teenager from Islington North who was the daughter of a refugee who had fled for his life to safety in Britain.

He was wearing a tie and jacket which greatly pleased Ivy, my veteran UNISON colleague from Derby, who had been sitting next to me for the conference. She had expressed some concerns on this matter beforehand but she did notice that his tie was not fully done up.

He looked relaxed and confident. The pressure must have been immense. He started brilliantly, poking fun at the right wing gutter press and their absurd reporting about him. On how he wanted the earth to be destroyed by an asteroid, English premier league football would be doomed if he became Prime minister and his "love" of Chairman Mao bikes.

He thanked former leader Ed Miliband and praised his opponents in the leadership battle. He wanted an inclusive shadow team from all wings in the Party.  He did not want to impose ideas and instead wanted an open, real debate. Straight talking and honest.

He attacked the government for not standing up for the right things such as pressuring Sauria Arabia over the likely beheading and crucifixion of a 17 year old protester, Ali Mohammed al-Nimr.

Since his election he has had plenty of plenty of advice on what to do. He has been accused by the Tories of threatening the economy and family security. Where is the security for the millions of UK families who have suffered the longest fall in living standards since records began? (I looked at the pictures of the shadow front bench team nodding).

He made a few slip ups in his speech but recovered quickly and did not seem put off. At the UNISON reception last night he said this was one of the few times he had ever read out a prepared speech.

Jeremy praised our British military but said he had a mandate to oppose the £100 billion that would be spent on Trident nuclear weapons. He agreed with Paddy Ashdown that there needed to be a  diplomatic solution to the war in Syria.

He made it clear that there had been a "political earthquake this summer" and the modern left will build a society for the many not the few.

Jeremy wants grown up real politics where real people debate real politics. No personal abuse. No rudeness. He quoted Maya Angelou, you may not control all the events that happen to you, but you can decide not to be reduced by them. Cut out abuse. Cut out cyber bullying. Cut out misogynistic abuse.

Stop Tory gerrymandering of the Boundary Commission. Their broken promise on tax credits will mean low paid workers will pay the price of the cut in inheritance tax cut for the wealthiest 60,000 UK families.

Kinder politics, Labour politics with people before profit. We need Council housing and to build a decent home for everybody.

The few tell the many what they have to live on. Since Cameron has become Prime Minister he has received £55 million from hedge funds. In return they have got £145 million in tax cuts.

He finished by reminding us that the last bearded man to lead the Labour Party was our founder Keir Hardie. Who was once asked to summarise his life. Hardie thought about this for a moment and said "My work has consisted of trying to stir up a divine discontent with wrong".

There followed a genuine, warm and enthusiastic standing ovation in the hall. The speech was aimed at the Labour  Party but will I think will resonate throughout the Country. The Labour Party has changed. There has indeed been an earthquake in British Politics. Whether some members like it or not. I don't think that any of us really understands what has really happened and what comes next. It is just too soon.

We are now not all things to all men and women. We are becoming as confident and assertive as the Conservatives are with their natural policies. Labour is unabashed pro peace through the united nations, anti racist and welcoming to the oppressed, pro nationalisation of natural monopolies, anti tax abuse by the mega rich, pro workers, anti poverty & pro equality. We will indeed tax the rich and spend on the poor and our public services.

This is all of course high risk, it could all be a flash in the pan and we may crash and burn. But to win in 2020 was always going to be a tall order. We have to take risks in politics. Nobody, repeat nobody really thought that Jeremy would win the leadership race, so humble pie should be partaken in huge chunks by those who now predict disaster for the Party. We have a capable, personable, pragmatic and intelligent leader with a huge democratic mandate.

A little while ago I said at a meeting that the progressive left mostly agree on our goals but cannot agree on the timetable and the way to get there. There is an opportunity now to get a Prime Minister elected who can actually get us there a lot sooner than anybody else thought possible and who deserves their chance to deliver.
Posted by John Gray at Wednesday, September 30, 2015