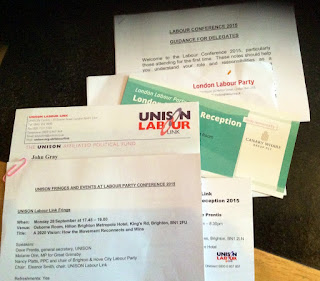 I've just finished packing for Conference and will soon be on my way to catch the train for Brighton.  For the Party this should prove to be a pivotal Conference.

After the shock and devastation that we all felt following the Conservative victory in May, we now unexpectedly have a Labour Party Leader, Jeremy Corbyn, who is firmly of "the left".

He is also supportive of trade unions and many of our policies and who actually defines himself politically as a trade unionist.  I don't think this has fully sunk in yet.

I also think that many people do not fully understand the reasons for his massive victory nor the political mood change that brought it about.

Its not just those on the right who just don't get it. On the left there are those who don't understand how you can be a radical and softly spoken. How you can respect those who you don't agree, without the need to attack them personally.

Jeremy of course, has to deliver. To do this he has to win the next General Election. It is pointless to have a leader who supports you if he or she is not in a position to actually legislate. This is especially important to trade unions, when we are currently facing a huge threat to our long term existence from the Tory (anti) trade union bill currently going through the House of Commons.  The Unions foundered the Labour Party in the first place to rebalance power in the workplace in favour of workers.

It was always going to be tough to win the next election regardless of who is leader. The economy is likely to slowly recover (in spite of Tory policies), unfavourable boundary changes are very probable and if the UK votes to stay in the EU then UKIP is likely to collapse. So difficult but a Labour leader who can inspire and enthuse could do it.

The first big test will be the London Mayoral, Scottish Parliament and local councils elections in May next year.

Expect further abuse and monstering of Jeremy (and his family) before then. He therefore needs all our support. The new members and supporters who have flocked to the Party must take the next step and become activists and be prepared to organise and go out on the doorstep.

Existing Party activists who didn't choose Jeremy as leader must now accept that he is and he has a mandate for change. It doesn't mean you will agree with everything (who does in life?) but all those who consider themselves democrats must accept this and give him his chance. There is no alternative to this and those who don't like this will simply have to lump it.

I will post further on the Conference as and when.
Posted by John Gray at Saturday, September 26, 2015