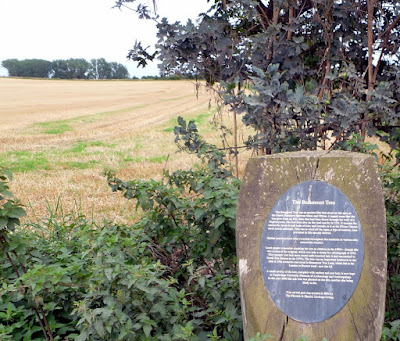 While out walking this No 23 pathfinder 8.5 mile walk in Bedfordshire during the August Bank Holiday weekend, I came across this plaque on a public footpath, which crossed a minor country road(click on photo to bring up details).

This is a really strange, strange story. Nowadays the State sends RAF  drones to kill British outlaws. In the 1700s they shot them and then buried their bodies at a crossroad with a stake through their heart.

Not sure which is the worse fate?

Personally, I think I would have also been inclined to try the large Gin & Tonic remedy for the Ague (see below) rather than use my hair or toenails.

This is from the Bedfordshire Council website - "The parish register states that a highwayman, name unknown, was shot in Silsoe Lane (also called Beaumont Tree Lane) in 1751 which led to the main Bedford to Luton road now the A6.

The highway man was reputedly buried at the crossroads between Flitton and Silsoe near Beaumont Farm, with an elm stake cut from a hedge through his heart.

If this is true, it is surprising that it is mentioned in the church registers. From this stake, an elm tree, known as Beaumont’s or Bowman’s Tree, grew which had magic powers. Ague, a type of malaria, was common here because of all the standing water on the Moors which attracted mosquitoes. The prevention or cure for this was to hammer an iron nail with a strand of your hair or with a toenail into the tree as the church clock struck midnight. How effective this cure was is not known but in the Fens, opium was used and quinine in tonic water, liberally accompanied by gin, was also considered to be a useful remedy.

The original tree was only a stump in old photos from the 1930s and another elm stood there which succumbed to Dutch Elm disease. Pieces of the original tree are in the Museum of Archaeology and Anthropology, Downing Street in Cambridge including iron nails and black hair wound round one of them. They are not on display but are kept in storage so if you want to see them, you would have to phone to make an appointment.

In 2004, the Flitwick and District Heritage Group put up a carved post with a plaque at the site of the Beaumont Tree".
Posted by John Gray at Wednesday, September 09, 2015