Jeremy Corbyn Wins! Our New Labour Leader of the Opposition 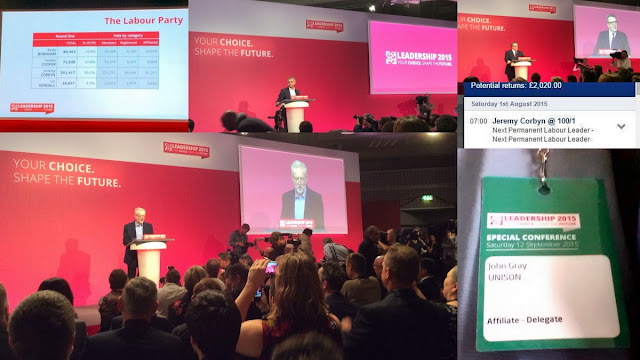 I was at the Special conference held this lunchtime to announce the result of the Labour Leader and Deputy leadership elections. I am an UNISON delegate to this year's Labour Party conference, so was automatically able to attend this one as well.

I had a number of quick chats with various UNISON and Labour Party colleagues in the queues to get my credentials and then into the hall including our UNISON General Secretary, Dave Prentis.  I managed to get a seat near the front. The hall was packed, warm and stuffy. Lots of hot air around no doubt!

There was an air of excitement and anticipation even though I don't think there was much doubt at the result. The press was gathered like a pack of wolves at the front staring at the crowd looking for a good (or rather salacious) photo opportunity.

While we were waiting for the start I overheard a delegate say that he had joined the Party in 1968 and had waited all his life for this moment. Sitting next to me a fellow IPAD user pointed out that the Jeremy Corbyn Wikipedia page was already showing him as "Leader of the Opposition".

The meeting began just after 11am with the Labour Party General Secretary, Iain McNicol, making a good joke at our expense by pretending to make the announcement there and then. He made some interesting comments about making sure that all the new Labour members and supporters actually turn up and campaign at the doorstep during elections. Also, that we must always make sure that our policies must relate to the concerns of ordinary people.

He introduced the new Labour Candidate for London Mayor, Sadiq Khan, who started his speech by saying that he can still not believe that a "sarf" London boy and son of immigrants was standing as Labour Mayor. Sadiq stressed how important it was that we all unite around the new leader.

All the Leader and Deputy leader candidates then trooped into the hall and sat down. There was a lot of cheering and clapping. They were all smiling even though by then they knew the results.

The first result was for Deputy leader and Tom Watson was elected by a comfortable majority, Stella Creasy was second.  He then gave a speech noting firstly that he had been told to "keep it brief" (which he rightly ignored) and that he would be loyal to any leader but that the Party itself was greater than any leader. He also had a clear sense that the election result would be a referendum on the political process as much as anything else. He warned the Tories who are sneering that Labour will not win to just "watch this space, watch this space".

Finally, the vote for Leader. It was all over in minutes. Jeremy won an outright majority on first preference vote in all 3 categories of membership. He got a quarter of million votes compared to second place Andy Burnham's 80,000. A decisive victory and mandate.

His acceptance speech was typical Jeremy. Gracious, polite but direct and to the point. He was emotional when he attacked the media for their vile behaviour towards former leader Ed Miliband, and members of Jeremy's own family.  He thanked all his fellow candidates. They have always remained friendly with group hugs.

He was thinking of forming an ABBA tribute band with them. He thanked Andy for his work on NHS. Yvette for bringing attention to refugees and described his friendship with Liz, who despite differences, is someone with real conviction.

He told us he will be attending the demonstration today in London in support of refugees.

Thanked his staff and all unions including UNISON who nominated him. "We are a party that is organically part of the union movement". He then attacked the Tory attempts to shackle unions with their new anti-union bill.

He also thanked his friends and for their advice. Sometimes he would have rather not received this advice but that is what friends are there for.

This election was about "hope and opportunity". He welcomed back all those who had recently joined the Party who had left in the past disillusioned.

He thinks that his election shows that the young generation are "political". It was just they were turned off by the way we do politics.

The fight back starts now.


He thanked the Labour leaders of Scotland and Wales for their work. Praised the Mayoral candidate for Bristol and Sadiq in London. "We must stop the social cleansing of London" and build homes.

"London needs a Labour Mayor and Sadiq is the man to do this".

"There has been an incredible mood change in Europe towards refugees. They are human beings just like you and me". We must recognise that going to war causes bitterness.

"We cannot accept the world's gross inequality... We are one world... Let that message go out today".

"The Tories have used the 2008 financial crisis to attack the poor". We need an economic strategy that deal with real issues.

He stands here today because of the work in the past of Labour giants but their work must now continue and now no one must be left behind.

"This campaign is about shaping our future. This will be good for everyone and bring about the justice we all crave".

The conference then ended with the traditional Labour Party standing ovation for our new leader. I suspect that this one was more heartfelt than most have been in the past.

I'm off to Brighton for TUC Congress tomorrow morning. In the light of events this should be even more interesting than usual.

One final thought for now. I chair the UNISON London Labour Link Committee and our next meeting is on the 21st September. Will Jeremy turn up as he always did in the past to deliver his Parliamentary report and answer our questions? I suspect that he will be far too busy but if he possibly can, he will.
Posted by John Gray at Saturday, September 12, 2015