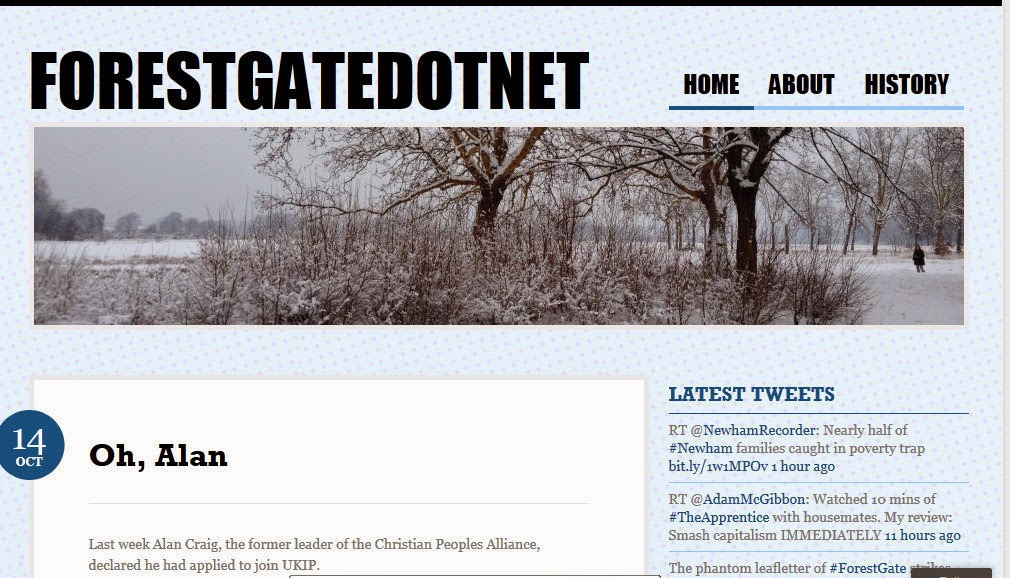 Great post by Forest Gate blogger Martin Warne about the former leader of the Christian Peoples Alliance, Alan Craig, who has joined the far right UKIP.

As Martin points out in his 2010 General election manifesto amongst the many "bonkers" and "unpleasant" things he said about gays and Muslims Craig also pledged to:-

"Strangers into citizens
We would tackle discrimination and embrace the talents of asylum seekers, as many successful asylum applicants are highly trained and dedicated individuals. It makes no sense to leave them on the scrapheap, unable to use their professional skills to provide for themselves, their families, or contribute to the British economy.
[Asylum] applicants will be treated as if they were British citizens with full access to state support and the right to work.
We will tackle the problem of illegal immigration by an amnesty that brings irregular workers into mainstream society, paying taxes.

A time of jubilee for the world
Aid will be given in grants and not loans and not tied to poor countries opening up their markets to powerful multinationals from rich countries.
We want the unpayable debts of the world’s poorest countries to be cancelled in full without strings attached.

I wonder how this will go down with his new mates in UKIP down the boozer on a Saturday night?
Posted by John Gray at Wednesday, October 15, 2014

Someone told me the London Underground zones are to be changed. Stratford is moving to Zone 2 and Barking in Zone 3.

Whilst there is something in the news about Stratford, I can't see anything for Barking.

Do you know anything?. The person who told me was adamant Barking was going to be zone 3.

I thought this post was just about Craig and kippers being bonkers not about TFL zones?

That is the nearest Newham related blog. I thought it might inspire you to blog about something relevant to Newham.

Alan Craig was a voice against the mega-mosque.

He was one of many voices against the so called "mega-mosque" but one that divided and poisoned Community relations in Newham.