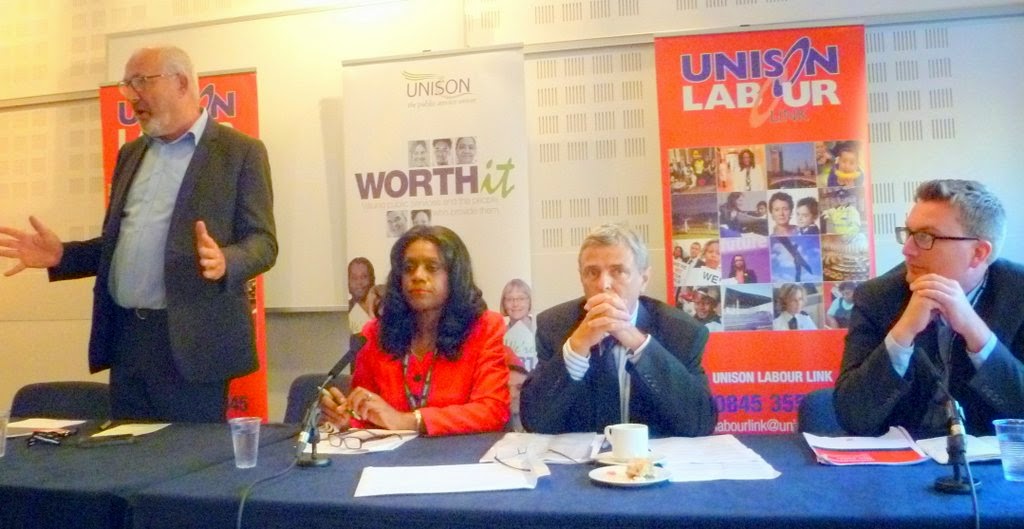 I am still catching up on Labour Party Conference posts. This is on the UNISON Labour Link political fund fringe on the Monday evening.

Jon Trickett MP the Shadow Minister for the Cabinet Office spoke first about the Tories declaring war on public services. They have cut staff, outsourced and slashed pay.

Their war is about "public bad" and "private good". We know what happens if a public service goes private. The pay of Chief Executives compared to their workers goes up from a ratio of 1:22 to 1:276.

The privatised companies make excess profits but they also don't pay tax, they don't deliver on contracts such as Olympics and the risk always come back to the public sector.

Labour Pledges to get rid of this "public bad" assumption. Also bad companies cannot expect to be on any future government procurement list. We need to reverse the dogma of market triumphalism like we did in 1945.

UNISON General Secretary Dave Prentis, spoke about the many good things that came out of the  recent Labour Party policy weekend in Milton Keynes, such as no longer will the cheapest bid automatically win public contracts. The downside is the current international trade talks which are not about fair trade but about getting rid of collective bargaining and stopping public services which have been privatised ever being brought back in house.

The value of pay for public sector workers has gone down by 1/5th in 5 years. We have lost 800k jobs. We have 1.4 million on zero hours contracts. We need to fight for a living wage now and not one in 5 years time.

Paul Hunter from the Smith Institute spoke about their new report on outsourcing.  6% of the UK economy GDP is awarded to the private sector with little or no evidence and information that it is more efficient or saves money.

Public contracts are being run by driving down labour costs, not for value for money nor efficiency. It is a return to Compulsory Competitive Tendering. Pay, benefits and pensions are being driven down.

I asked a question to Paul about whether his report has looked at the huge administrative cost of outsourcing. Huge amounts of time and money is spent on drawing up contracts and specifications. Even more money is wasted on bids and due diligence . Legal costs alone are massive. Public bodies have to then evaluate the bids, meet any challenges and the cost of monitoring ongoing compliance. Paul said this was not within the scope of this report but it is obviously a key issue.
Posted by John Gray at Sunday, October 12, 2014