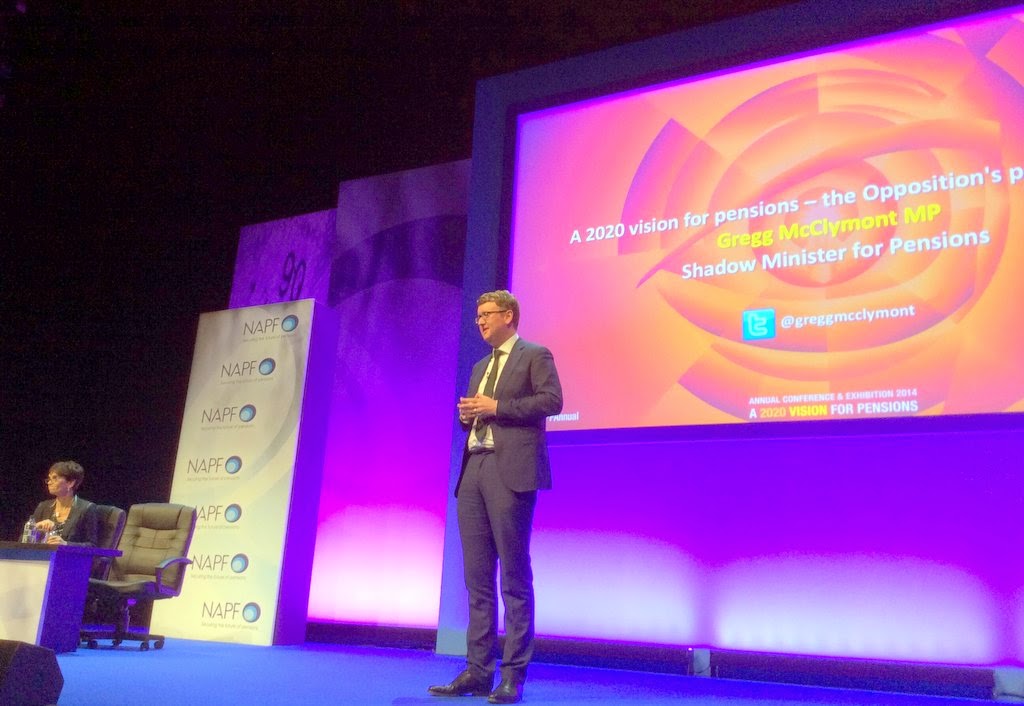 Labour Shadow Pension Minister Gregg McClymont spoke (with a smile) about the previous speaker Bob Geldof being his "warm up act" this year.

Gregg has now been coming to the NAPF Conference as Shadow minister for the last 4 years.

He has four key points.

1. There has been successful pension changes and measures which have been delivered with consensus.
2. We all need to deliver on pension promises
3. The Government is currently in the wrong place
4. It may have made decisive policy but not with the necessary checks and balances

His thoughts on these points

1. The new universal flat rate state pension and the successful launch of two million people into auto enrolment  was achieved by consensus.
2. The Government under pressure from the Labour Party and the NAPF have introduced a charge cap and the "disclosure" of transaction costs.

3. Where the Government is in a wrong place, is in the governance of pensions schemes. Where there are not independent trustees, workers are unlikely to see value for money in workplace pensions. Pensions of all types including contract schemes should be governed by independent trustees with an obligation to act in their best interests.
4. Soon many workers will be able to take out all their pensions in a lump sum (after paying a possible massive tax) but what will the guidance look like to stop people being ripped off and the likely take up by individuals is just not known.

Labour priorities are for value for money and to get this we also need to promote the scale of pension funds.  Larger pension schemes are more likely to delivery value for money.

In the Q&A I asked Greg would he agree that independent trusteeship of all pension schemes is also about re-establishing trust in the industry after decades of financial scandals.  People would save more if they were more confident that their money was being looked after by genuine beneficiaries trustees who will be acting on their behalf and making sure they are not being ripped off .

Greg thought that greater trusteeship would help establish checks and balances which is especially important since millions of people have been auto enrolled by the state and there is even a greater  responsibility to make sure the money is looked after properly.
Posted by John Gray at Saturday, October 25, 2014