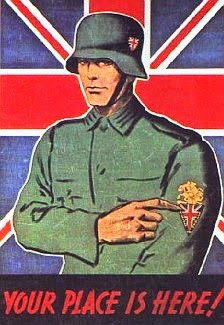 Just a gentle reminder that this is the time of year that the fascist organisation currently known as "Britain First" shares seemingly patriotic posts on Facebook and twitter which appear to be in support of British troops and our Remembrance Sunday.
Please do not share these posts. A number of people have been taken in. So called "Britain First" is a fascist and Nazi organisation formed after a split in the racist BNP.

Remember that the fascists in this Country supported Hitler during the second world war and wanted the Nazi to win who would have turned Britain into a concentration camp.

So it is completely hypocritical of them to pretend that they are in anyway a "patriotic" party supporting our military veterans.

The only "veterans" they will support are Nazi SS murderers of brave British commandos and prison of war escapees who were tortured and then shot in cold blood in World War two.

Check out what a genuine British combat veteran thinks of "Britain First".

I have no idea "Justin".