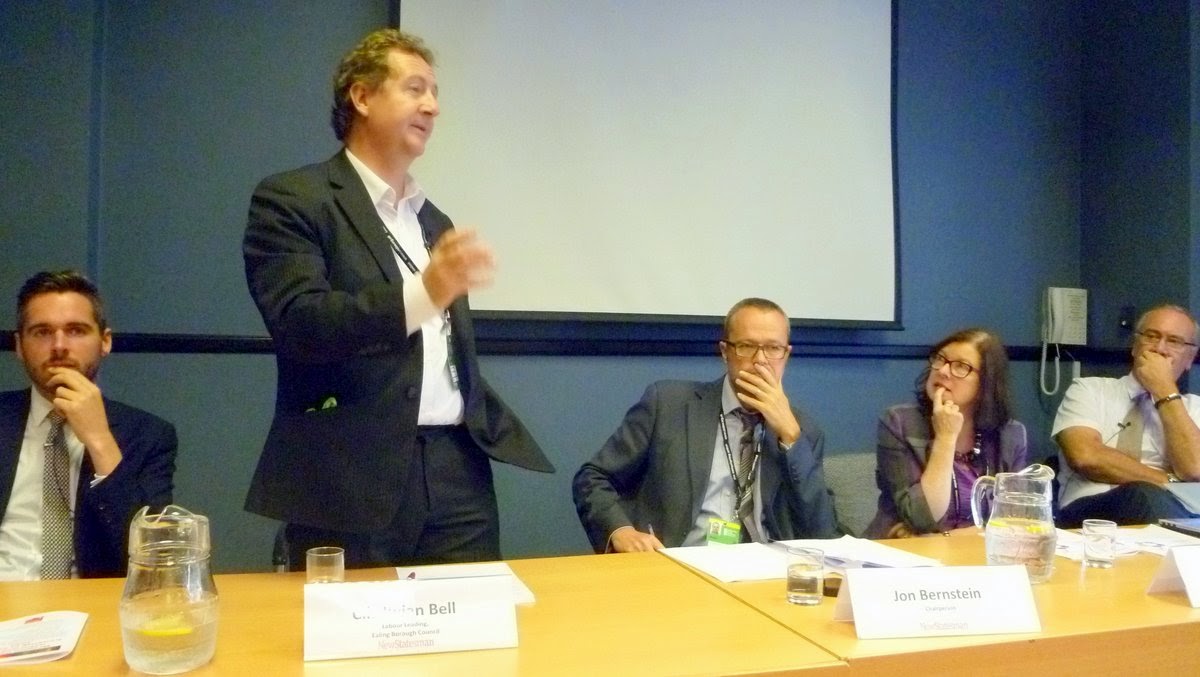 This Labour Party conference housing fringe took place on the Monday afternoon outside the secure area. There was an error in the programme about timings which meant I think some people missing it.

The Chair was from the New
Statesman, Jon Bernstein (centre of photo)

First speaker was shadow planning minister, Dr Roberta Blackman-Woods MP. Roberta said we need to build 200,000 homes per year and asked how will housing associations be part of this mix? Affordability will be key and the Michael Lyons report for the Party will be out soon. We should also be about "Place making". What jobs and services are needed? not just about new housing units. Many councils will not want to take role of housing developers so there is a strong role for associations.

Next was Rod Cahill, the Chief Executive of Catalyst Housing (on right) who started in housing as a trainee in the London Borough of Camden in 1975. In that year Housing Associations only built 22,000 properties while local authorities built 145,000. Unlike now. There has been a 100,000 per year shortfall in new build for the last 30 years which means we are need 3 million extra new homes which causes shortage and affordability problems.

It will take a long time to increase production. Catalyst will build 1200 new homes this year. Rod believes that Housing Associations are a key part of the solution. There is a need to generate surpluses to cross subsidy the cost of new build. There has been a 70% cut in capital support by this government. Without surplus they would not be able to build at social rents. Catalyst made £40 million last year which they will reinvest in bricks and mortar.

There needs also to be a change in planning. There is an anti development culture. We need clarity about affordable rents. We need land and to re-professionalise Housing. We need government support for when the market drops and we are unable to cross subsidise. Public money can be found for absolute national priorities. We need to go back to 40 years when we built 300,000 homes per year.

Cllr Julian Bell, the leader of Ealing Council (standing) spoke about a "perfect storm" in housing. With the problem of "beds in sheds" and affordability.  You need to earn £70,000 per year to buy a house in Ealing where the average price is near £300,000. In his borough they had set up a Housing commission to examine what can be done and increase supply. Raising the HRA headroom would help.

My question to the panel as a Labour Councillor and UNISON Housing Association branch secretary was that that any solution to the Housing crisis will have to result in even more government spending and subsidy. I said I am not digging Rod out in particular since this is a sector issue. The problem with housing associations is that they have a democratic governance deficit. They need to raise their game to account for public money. The average CEOs has increased their salary by above inflation while their staff are given less; some of them despite being charities refuse to even recognise trade unions while many have little or no involvement of residents in the running of their organisations. If Housing Associations want to be on board then there has to be change.

Rod said they do recognise trade unions and what does my question have to do with housing supply? Housing associations are private organisations and do not rely on public money. Only £1 in every £6 invested is public money. I said that this is about governance and housing associations do rely on housing benefit and past public investment. Unless we have proper accountability and structures they should not get public money.
Posted by John Gray at Wednesday, October 08, 2014