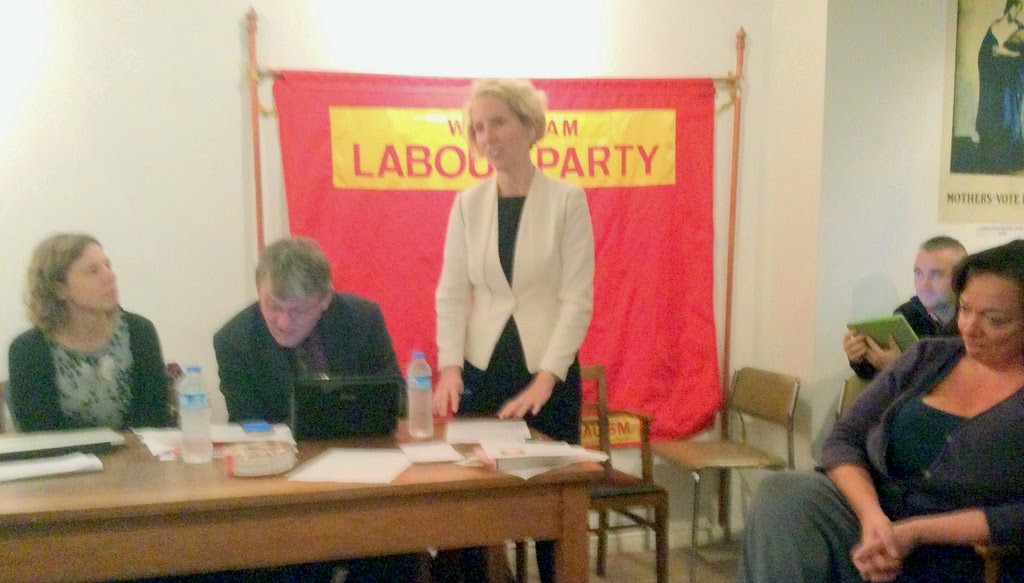 Emma started by thanking our MP Lyn Brown (right of picture) for her advice and support in becoming an MP.

She then said she realised that in somewhere like West Ham housing was a top issue.

The recent Lyons Review for the Party recognised housing is a key priority. Ed Miliband understands this and that is why her role is now in the shadow cabinet.

Housing is fundamental to everything we do in a future government. If we can't get housing right, we won't get anything right. Especially in the private sector. Ed's mission is to double the number of homes being built.

For over 3 decades we have not been delivering anywhere near the number of homes needed. We now have the lowest level of new build since the 1920s. We did  many good things in past Labour government but can't pretend that we built enough.

The construction industry is dominated by big builders, who also build the smallest houses in Europe. Families in the UK don't need less space to live in than those in Germany or France?

We need to bring more land into use to be built upon, more power to councils to allocate planning specifically for 1st time buyers. Emma use to work and rent in Belgium for 6 years. You don't have to go to "Venezuela" to see that there are different models of private renting. Labour will introduce 3 year tenancies, cap the rise of rents and ban fees for letting agencies. Private sector regulation needs to be expanded.

In the Q&A I introduced myself as a UNISON Housing Association delegate. I told Emma while I think that the scale of housing crisis is such that local authorities will have to take the lead in building homes. I do believe that Housing associations have a role but I am deeply concerned about the governance of many housing associations and their lack of accountability for public money.

Some have little or no effective tenant and resident involvement; secret remuneration committees that increase their chief officers pay by huge amounts while cutting the pay of its front line workers. Despite being registered charities some refuse to recognise trade unions and one, Catalyst Housing Association, has recently responded to complaint of bullying against its HR by attempting to de recognise UNISON. Housing Associations have got to get their act together.

Emma said that she shares my concern about housing associations. There are some very good ones who are doing excellent things but she is worried that due to the 60% cut to grant by this government, they are being forced to take part in revenue raising schemes such as shared ownership and market rents.  Some are in danger of losing their social ethos since they are indeed supposed to be charities. She said that she is worried about what is happening in Catalyst and will speak to me about it later.

It was not a good night for Housing Associations, since another GC delegate who is a shared ownership resident, spoke about his "corrupt" housing association and its "bullying and intimidating managing agents" Shared ownership leases are feudal and enables landlord goons to send threatening letters. To them we are just peasants.

Emma said she was determined to do something about this if Labour is elected, she hears this story too often. I later asked the delegate who the housing association was and it turns out it was one of the few in the G15 who refuse to recognise trade unions. Landlords who don't respect the human rights of their staff won't treat their residents well either.

She finished off by saying that she wants to turn "benefits into bricks". If you pay people properly and not have them to rely on state benefits it is empowering. The Mansion tax is a fair way to help the NHS.  On the question of building on brownfield sites v green belt. She agreed with Lyons that it should be brownfield first but this was not the whole answer in areas of high demand. Swapping land in and out of greenbelt could be an answer.
Posted by John Gray at Monday, October 27, 2014

All I hear is affordable homes and labour talking about home owners, it sounds more and more like Thatcher and New labour maybe they are way to close to Progress.

I have hardly ever heard labour speak about the poor or those who need council housing, but affordable homes and home owning.

I truly do not know where labour is going but if it wants to be New labour then go for it.

I will move to another party.

Treborc, haven't you heard about Newham Council leading the fight against Landlord crime?

Or about West Ham CLP drafting the motion calling for new criminal offences?

I think you will find that it is in fact "the poor" who are in greatest need of "affordable"(social rent) housing?

If you aren't bothered by the need for low rents it would appear that you have already found another party...it is called the Conservative Party.

I wish you well with your new mates!