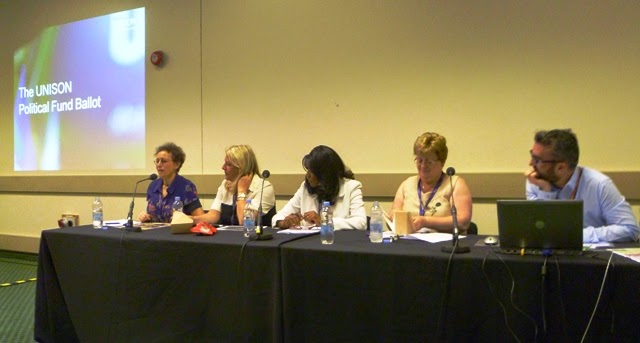 "...don't be confused. The ballot is a vote about having a political voice and not on affiliation"

Eleanor Smith, the Chair of UNISON National Link political fund spoke first. She made it clear that our political funds are our union's voice. That is why the Tories hate them.

Every 10 years we now have to ballot all members about whether or not to keep our political funds. Eleanor listed the successful campaigns that the funds had run in recent years and this is why we need that voice.

The Labour Link fund is a key voice for union. It means we can take up the big issues of pay and resources and other specific issues such as social care and privatisation. The recent Labour victory in the West Midlands saw the collapse of biggest ever Police staff privatisation programme. Never forget that gay marriage was delivered by Labour MP's. The ballot is not about the relationship with the Labour Party, it is about being able to campaign and speak out.

James Anthony, the General Political Fund (GPF) Chair spoke next. UNISON has a unique political fund structure but other unions may adopt our model soon.

The recent Government "Lobbying Bill" was intended to target UNISON. The law is in place but we are waiting for guidance from the election commission. We can communicate with our members outside the Bill. It is important to have the GPF since many of our members members do not support Labour and vote for the Tories or don't vote at all.

Nearly all conferences motions need to have a political voice. It would be pointless to try and campaign without this . It works best when the GPF campaigns in tandem with Labour Link. Without a political fund we would not be able to promote causes such as equality, self organised groups, Pride, Durham Miners Gala. The fund also help us make the best arguments by funding research.

Without the political fund we would not be able to ask voters not to vote for racist parties. Remember how we helped defeat the BNP fascist. Pay is a huge issue. We need to take forward a political message. We will only win strike action if we win the support of the public as well as our members.

If the political funds were not so successful, the Tories would have not tried so hard to get rid of them.

Jean Geldart from "Hope Not Hate" spoke last. Jean is of course a retired UNISON activist and former NEC member.  She reminded us that in 1993 the first ever BNP Councillor was elected in Tower Hamlets in a by election. The GPF gave £30k and bank rolled the campaign to get rid him.  Which 9 months later we did at the full Council election. You can only campaign against a political party if you have a political fund.

There used to be 2 BNP European Members of Parliament and 57 Councillors with 12 in Stoke and 12 in Barking and Dagenham where they formed the opposition. We didn't listen to those who said "ignore them they will go away". HNH paid for organisers to work in Barking & Dagenham.  The BNP is now finished. They have only 2 Cllrs left. This was due substantially due to funded campaigning.

We now have UKIP. Again, some people are saying "ignore them and they will go away". The UNISON campaign in North West region against the BNP & UKIP involved over a million bits of paper. Only 6 UKIP Cllrs were elected in that region. Which is far less than other similar parts of the country.

This country would be going in a different direction if not for the GPF which embodies Union values.

In Q&A I asked Jean (I use to be the assistant branch secretary of Tower Hamlets Local Government branch when she was branch secretary) What impact the lobbying bill will have on Hope Not Hate?
She said not as much as on the GPF since their total income is relatively small but the biggest problem is the 10k limit per Parliamentary Constituency. That means for example that UKIP will out spend us in their target seats since you just don't just pay for the paper in leaflets but also the pay of staff who design it.

Liz Snape concluded that this ballot is not about a particular party but about the funds. We want a big yes vote."... don't be confused. The ballot is a vote about having a political voice and not on affiliation"

There was a good question from a delegate that Labour Link should be doing more to point out its successes since he was fed up with the extreme left whinging about the Labour Party during every opportunity at conference.

Lucia reminded us about the threat that UKIP poses.  In her home in the north of Ireland she had lived through 40 years of racism and sectarianism. This has got to stop. There are now 3 UKIP Councillors in Northern Ireland who had all left unionist parties due to their extremist views.
Posted by John Gray at Thursday, June 19, 2014

I've decided not to bother registering to vote being severely disabled and winning my ESA with ATOS or rather it went to review, I ended up losing £30 a week because these days if you have an accident the day before you retire you would get higher benefits because of your contributions. God help you if your born disabled sick.

Labour today is without doubt the worse labour party I've ever seen it's a middle class party so affected by the Progress group within it, Militant now looks like school boys.

I've written to my Union to end my political levy as I cannot see my money going to see Miliband elected.

The Bloke has strings attached to him and I suspect Progress are pulling them New labour is dead but as Progress said not the ideology.

I sat listening to Cruddas speaking and for god sake that's not labour, the front Bench is almost totally Progress and to the right, we have nothing left in labour now with the stupid statement about tax and spend being over.

The issue is what is labour where is it going and do the working class want to go with what has become a joke. Tell me what is tax for if not to spend you pay your tax for the government to spend to make this country a better place. You spend tax to build a infrastructure to house the people build roads and bridges so our steel works can employ people, what do we have now a labour party so scared of the Tories they are copying it.


The labour party has a leader who rating is rock bottom and it's rock bottom and to be honest it down at the level for a reason, the bloke is close to being the worse leader of any party in history.

Labour is moving into maybe one of the longest terms out of power it will make Thatcher period look like a week end.

I cannot allow my political levy go to this party or in fact vote for it, UKIP was looking like a good solid protest vote till they came out with the welfare policy.

Does anyone know when minors first outnumbered miners in Durham?

Ed is the most left wing leader the Party has had for decades and the Party itself is rebalancing itself away from neo-iberalism. Maybe not enough but definitely moving in a more "progressive" (dare I use that word?) direction.

There will be plenty of clear red water between Labour and Tories next year but if you want to help keep the Tories in power that is entirely up to you.

But please no more complaining about what they do in government. Your choice.