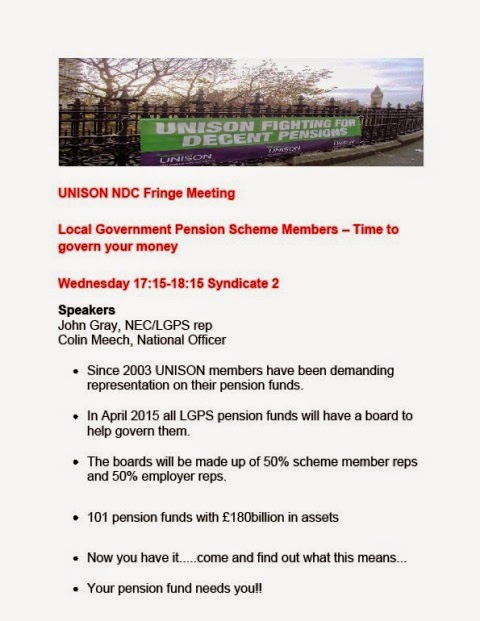 This is introduction to the fringe I chaired on Wednesday evening.

"Welcome. My name is John Gray I am branch secretary of Greater London region Housing Association branch and an NEC member for Community. I have also been a member of the Local Government Pension Fund (LGPS) since 1993 and since 1996 I have been an observer then a member nominated representative (MNR) on my scheme investment panel and pension committee.

On my right is a person who needs no real introduction, Colin Meech, UNISON national officer for Capital Stewardship and LGPS governance specialist.

The agenda for today’s meeting is a few words from me following by an update by Colin on the latest developments on the governance of the LGPS.

To be clear. My pension fund is my own money. Yet when I first became a pension rep on my scheme and began asking what was happening with my money, the 20% of my pay that I and my fellow union members had been paying into the fund, I remember being told by one Councillor on its pension panel that I was "an observer, and observers should be observe and not speak".

Now, as you can imagine I gave that Councillor the benefit of my views on my right to speak and raise questions about my money at this and any other future meeting. To be fair that was the last time that happened to me but that attempt to put me in my place reminded me that essentially, we were powerless in the LGPS, especially compared to private sector member nominated representatives who had the legal right to be full members of pension boards with voting rights.

To be frank I was lucky in my scheme that we were even “allowed” to attend the pension committee. Some UNISON members were told by Chairs that "over their dead body would they have a union rep at their meeting”. Note the view that this is “their” meeting. Of course some Funds had no pension committee at all, and the fund was run by a Chief Officer alone. There have also been well run funds that welcome MNRs.

This is why I am so pleased thanks largely to UNISON and our national officers such as Colin that we now have some real rights and responsibilities to govern our own money. Colin will brief you on the next steps but he will also warn you about the inevitable resistance by vested interests to the democratisation and efficient running of our funds. The usual suspects still want things to remain the same and treat us as 2nd class trustees.

Colin will also point us in the right direction but it is up to all of us to do our bit and make sure that we stop the financial services industry ripping off our pension funds and making sure that we invest our money in long term, sustainable, well managed investments that don’t for example employ child labour, doesn't kill its workers, bride public officials or destroys the environment.

Not only do we not want our money used in this way but also it is our belief that this will make more money for our fund than short term speculation.

I have now witted on enough and will pass you over to Mr Meech. Q&A afterwards. We will finish at 6.15pm".

(I will post a report on Colin's presentation next)
Posted by John Gray at Friday, June 20, 2014