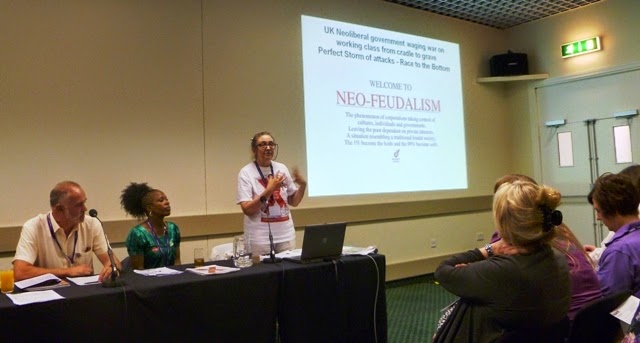 I went to the lunchtime fringe on health and safety. This was Chaired by Malcolm Harrington, from the National H&S committee. First speaker was Hilda Palmer from National Hazards campaign  & FACK (Families against Corporate Killers).

Hilda introduced herself as a "trouble maker and shit stirrer". She promoted the Hazards conference which takes place 29-31 August at Keele university (which UNISON is a strong supporter)

Health & Safety faces a perfect storm of attacks by this right wing government. As well as attacks on public services and the benefit safety net there is a  "Neo feudalism" race to the bottom.

The attack on H&S is not just about cuts but the government wants more power for employers and to get rid of minimum standards.

The Government say we should be competing with countries such as Turkey, where 200 miners were recently killed to due management negligence; Qatar, where it is estimated 1400 workers will die building the football stadiums for the next world cup and China were they have to fit suicide nets outside factories to stop workers killing themselves by throwing themselves off the roof.  Instead why don't they want us to complete with countries such as Norway which has a successful economy with high H&S standards.

There has been neo liberals in Government since the 1970's but this one is on steroids, rowing back a century of progress. We didn't vote to die at work. It is worse now than we possibly thought. All the evidence is that regulation saves lives and money

We love red tape. Better than bloody bandages. Remember that its not 148 who die at work each year (HSE) but nearer 50,000 who die each year from work incidents and disease. Compare this is the 532 murders. Don't forget the impact of ill health on peoples lives.

While the Health and Safety Executive estimate it costs £8 billion per year due to cancer deaths, Hazards think it is nearer to £60 billion.

The damage by Con-Dems since they took power in 2010 is immense. They have had 4 "reviews". The requirement to report accidents (RiDDOR) has been reduced resulting 30,000 less reports per year. There has been a 44% cut in the HSE. While there has been a 90% reduction in pro active inspections by local authority inspectors.  The Lofstedt report said that there was no need for radical change in H&S but the self employed are being exempted from the law and if they hurt anyone they cannot be prosecuted under H&S.

Tracey Harding, the Head of UNISON H&S unit spoke next on the new campaign "Cut Stress Not Jobs". Stress is one of the top 5 hazards identified by members. Cutting jobs and increasing work load leads to stress on those workers who are left. There are 2 main aims. Campaign against cuts and support for those affected.

UNISON will relaunch stress guidance in time for European Health and Safety week (EH&SW) and provide leaflets and other information. EH&SW will focus on Stress.

Branches need to try and engage with employers and encourage them to have a stress management strategy, conduct a stress audit and carry out stress risk assessments

Engage with members as well and and urge then to report stress issues and provide them support mechanism.

My comment in the Q&A at the end was that one of the best way to improve all forms of health and safety is to increase union membership and organisation. The more people in the union the safer we all are at work. 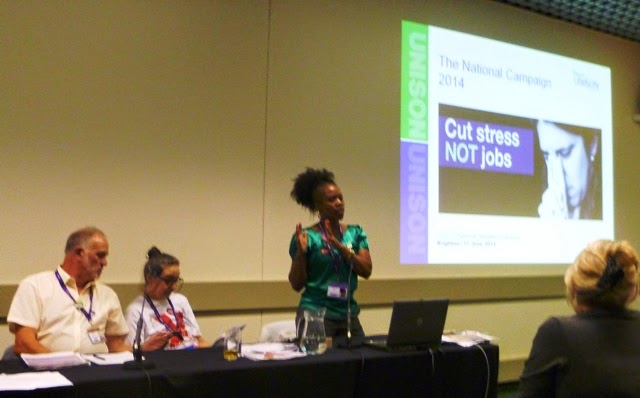