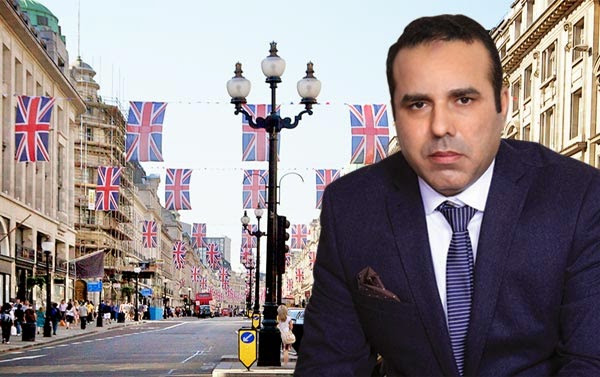 Malik is the leader of the Communities United Party and stood for election in 2012 for a seat on the GLA and recently for election as an MEP.

In sentencing, District Judge Ikram said, "Your activity certainly had the hallmarks of exploitation. You exploited the vulnerable and demanded more money. These offences are so serious that I cannot deal with this by any other way than an immediate custodial sentence."

Speaking about the decision, Suzanne McCarthy said, "The OISC is here to ensure that people seeking immigration advice are treated fairly by people they can trust. We have clear standards outlining what we expect in terms of the fitness and competence of regulated advisers. Mr Malik chose to operate outside the law.  I am delighted with the outcome of this case, and I hope it sends a clear message to other people considering providing immigration advice - either act within the law or you will find yourself in court."
Posted by John Gray at Tuesday, June 10, 2014

Is this anything to do with the Local Labour party?

nothing to do with us Guv.

I don't know if he was prosecuted for litter but I do know that the Courts banned him for making frivolous applications to them over stuff that had no realistic chance of success, without going to the Court first.

Ask BBM not me. I suspect that he was "fed up" that very few people Newham took any notice of him over elections. I could be wrong.

The Truth, the whole truth and nothing but the truth...

On 10 June 2014 the Newham Recorder circulated a general notice relating to the case of Mr Kamran Malik. The notice, masqueraded as a legitimate article, was authored by none less than senior reporter, Mr F. Mayhew. This article is a response to that notice.
The trial of the Communities United Leader, Kamran Malik, began and concluded with the lengthy and costly (to the taxpayer of course) pursuit of a prosecution by the Office of Immigration Services Commissioner on the basis of one (that’s right one) complaint from a non British National seeking permanent residence in the United Kingdom. In short, Mrs X was scheduled to return to her country of origin but applied for EEA Application Residence Card for five years in the UK. Mr Malik, serving as an intermediary, referred the matter to immigration specialists ‘Sky Solicitors’. Desperate for the application to succeed, Mrs X submitted a complaint about the initial failure of her application and demanded a refund.
It is alleged that, in an unprecedented move, the Office of Immigration Services Commission supported this complaint and saw fit to spend taxpayer’s money instigating a prosecution against Mr Malik for his intermediary role in dealing with the matter.
Naturally, this begs the question; it light of the government endeavour to clamp down illegal immigration, what would the possible motive be for a public body: that professes to ‘regulate’ immigration practice, spending British taxpayers’ money securing the residence of an over-stayer? As a consequence of her commanding role in the trial, Mrs X’s application for EEA Application Residence Card for five years in the UK together with her family was subsequently granted. It is ironic that the very organisation charged with regulating immigration practice played a more than significant role in guaranteeing leave to remain in the UK by somewhat unconventional means.
OISC appeared neither to have its 2012 Criminal Prosecution Policy which calls for an evidential test that considers: relevance and admissibility of available evidence, reliability of evidence relating to the identity of an alleged offender and reliability of prosecution witnesses, nor any transparent investigatory procedures. This called the legitimacy of its case into serious question.
To return to the response to the Newham Recorder piece, we are reminded that: despite Mr Malik standing for local elections on three occasions, this was not deemed worthy of the coverage from the illustrious echo chamber of the Mayor of Newham. All previous attempts by the Party to raise vital concerns within the local community were ignored: Newham Council’s expense of £111 million on its offices; £3.3 million on its failed Olympic enterprise ‘The Pleasure Gardens’; the investment of £40 million re-housing West Ham Football Club whilst there are 17,535 social housing properties in Newham; and 24,544 households currently on the waiting list coupled with a housing policy which dislocates the vulnerable from important family networks in its false claim of resolving the housing shortage problem; increased parking and business charges; the loss of public sector jobs and amenities in the falsehood of austerity. Every challenge in the name of public interest to the avaricious Labour policies aimed at forcing the majority in sufferance and hardship pay for the wealthy minority was certainly not reported on. Yet on this occasion the local journal has shown its standard of : poor reporting and inaccuracy.
The case remains on appeal through judicial review in the High Court. It is without doubt that the truth will be revealed and, as with so many who challenge the system, the sacrifice of one’s own liberty is often the price one pays for the freedom of the many.
Reported by E. Jonathan

Thank you for putting Kamran's case so eloquently.

We shall see what the "High Court" says (I thought it would be the Criminal court of Appeal?)

I do hope he has appropriate representation.