Can you be a Socialist and a Patriot? 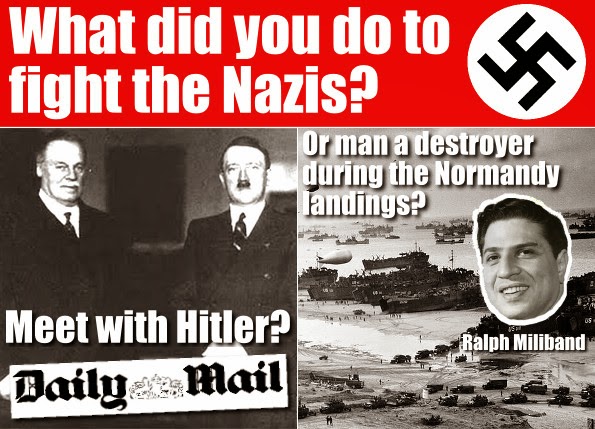 Hat tip to Ipswich Labour Councillor and former soldier Alasdair Ross, for his post on Lord West, who is a former Labour government minister and 1st Sea Lord (Head of Royal Navy).

Lord West confirmed to Alasdair at a "Labour Friends of the Forces" reception that he had told the Daily Telegraph his views of Tory minister Michael Gove, who suggested that you cannot be a Socialist and a Patriot by promising to teach him in a boxing ring - that you can.

Gove's ill judged comments remind me of the Daily Mail's foul attacks on the Patriotism of Labour Leader Ed Miliband by attacking his father Ralph Miliband, as a man "who hated Britain".

As the poster above reminds us, Ed's father was risking his life for Britain in the Royal Navy during the D Day landings, while a few years before, the owner of the Daily Mail was praising Hitler and the fascist Blackshirts.

Of course you can be a socialist and be a patriot who wants to defend your country against militarist or Nazi aggression. However, being proud of your country doesn't mean you think it is perfect and  that you don't want to change it for the better.

I would also add that in my view, if you are a socialist (as I define), you just have to be also an internationalist.

My final comment is that during Easter 1982 I was a 19 year old officer cadet in the territorial army and went on a familiarisation course with 29 Commando Regiment in Plymouth. During the course we visited the naval base and went on a tour of one of the ships based there called HMS Ardent. It was an interesting break from very arduous exercises and its crew were very friendly and welcoming.

A few short weeks later during the Battle for the Falklands, HMS Ardent was struck by 17 bombs in less than 22 minutes and was sunk, killing 22 (10%) of its crew. Its captain was the last man to leave the ship. His name was Alan West, who later became Lord West. A man who has actually some life experience to back his views, unlike Mr Gove, that you can indeed, be a socialist and a patriot.
Posted by John Gray at Monday, June 30, 2014

Good points, well made.
I could also recommend "The Lion and the Unicorn" and ""My country, right or left" both, of course, by George Orwell.

thanks Alan and great choice