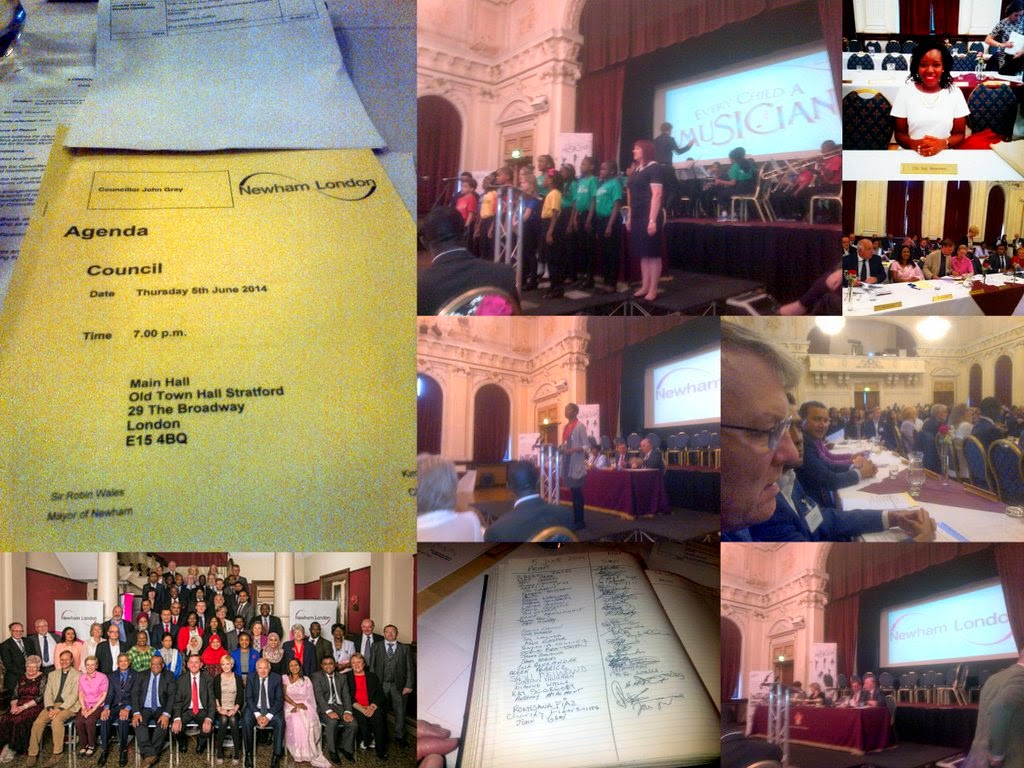 This is the nearest thing we get to a little bit of pomp and circumstance in Newham. The main hall is pretty magnificent and of historic importance to the Labour family movement.

It was in this hall that Keir Hardie was elected the first ever independent Labour Member of Parliament in 1892.  The first ever Labour controlled Council gained power in 1898 in West Ham (West Ham and East Ham Councils merged to form Newham) and the Party has dominated the Council ever since.

On May 22 I was re-elected as a Labour Councillor together with 59 Labour colleagues and Executive Mayor.  Labour Party took 68% of the vote in Newham.

No opposition Councillors were elected which is a humbling sign of the loyalty and support for Labour locally but also a huge responsibility on us to make sure that we do our very best for all residents during what will be a time of vicious government budget cuts.

Just read the minutes of the meeting and was surprised to read that councillors have voted to give themselves a pension scheme similar to the LGPS. I thought the whole reason for stopping councillor access to the scheme was because it was felt that pensions for councillors were wrong as they are not paid employees. I understand the arguments for and against but surely by voting to give themselves such a scheme, Newham councillors will run the risk of being seen as voting themselves benefits, and contribute to the lack of trust in politicians which Sir Robin Wales reported on at the same meeting.

The removal of Cllrs from the LGPS was a simply a spiteful act by Pickles and nothing to do with not being paid employees.

This actually gone him into trouble with a number of Tory Cllrs.

If we have (rightly or wrongly) a system where Cllrs are expected to reduce or even give up their paid work to act as Cllrs, I think it is appropriate that they have access to a decent pension scheme.

Otherwise we will run the risk that only the well off or already retired will tend to become become Cllr.

This also includes in my view all contracted out Council staff who should have access to such a scheme.

I do understand the arguments but have always been against pension plans for councillors. If an individual councillor wants to spend part of their allowance towards a private pension, that is their choice. I think Newham is a particularly difficult place for the discussion as many of its councillors receiving much higher than average allowances (due to high SRA payments) leading to a potentially high cost of an independent scheme. Its your area of expertise and you know how high the costs could be so I hope before such a scheme is agreed there will be full transparency over the costs. The proposal for the scheme came out of the blue as it was not in the manifesto for the recent elections so councillors hardly have a mandate to vote themselves such benefits. I am simply not convinced that it is right for councillors to vote themselves a pension scheme and any pension scheme should be discussed and reviewed by the London independent remuneration panel.

I think we will have to agree to differ. I believe that it should be compulsory for employers to offer decent pensions for all "employees". Allowances are clearly "pay" in my view. You pay tax and national insurance.

The recent tragic death of Cllr Kellaway reminds me that pensions are not just about retirement provision but also protecting dependents.

The idea is that the new scheme will mirror the old existing scheme. Nothing has been finalised and if there is a significant rise in cost then I will not (personally)support.

Do you have any evidence that Newham pays more in SRA than other boroughs?

John, we will have to agree to differ. When I said Newham allowances are high I was referring to national comparisons. I would have to check the London data but there are clear differences with Newham as it, like a few other places, has an elected Mayor. My basic point is that any scheme should be proposed by the independent remuneration panel, not by the councillors who would benefit.

I sit on a panel in one of the shires and it is an impossible task for both us and for councillors. However, the general feeling is that a lot of controversy would be avoided if allowance scales were set on a national basis so there would be parity across the country. Such a formula would be difficult to reach agreement on but I have spoken to councillors from all the main parties who feel agreement could be reached. Clearly such a formula would take into account "the London factor".

Yes, I think it would be helpful to have a national guide. There is a London panel http://www.londoncouncils.gov.uk/londonfacts/londonlocalgovernment/remunerationofboroughcouncillors.htm

I read the report and the independent panel says it regrets the governments actions. It does not, however, unless it is in the small print, recommend that Boroughs set up there own pension pots. Again, I can only stress that Newham Councillors, and the elected Mayor (who benefits most) should not take such unilateral action but should follow recommendations made by an independent panel. If this so important, why was it not mentioned in the recent manifesto?

The "independent panel" comments was a lot stronger than just "regrets"? Surely no-one really thinks it is good that half of all Cllrs in London are already retired?

I believe that elected mayors can still stay in the LGPS so they don't benefit the most?

Again, this proposal is restore the Status Que of the last 8 years.

The report you referenced clearly says elected Mayors can't stay in but pointedly says that police and crime commissioners can. I agree their regrets were expressed strongly and I understand their arguments whilst not agreeing with them. There is absolutely no evidences that membership rights to the LGPS has encouraged younger members to stand.

All of that is beside the point, as nowhere does the report say that councils should set up their own funds for councillors, and I still think it is simply wrong for Newham Councillors and their elected Mayor to vote themselves a pension fund with no independent recommendation to back the move.

I think we must continue to beg to differ on that point. On the wider point of attracting younger councillors i agree entirely but whatever is tried does not seem to work. Personally I think the political parties need to do far more and you will appreciate this is a national issue not just a Newham one.