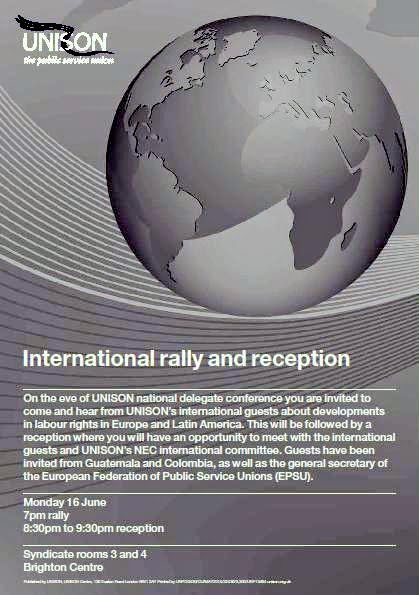 Next week is the UNISON National Delegate Conference. The international relations sent out the following information for delegates.


"If you are going to NDC next week you may be interested in some of the international activities that have been planned. We will have visitors from Swaziland and Colombia as well as the general secretaries of PSI and EPSU.

TTIP
One of the big debates at conference will be on the Transatlantic Trade and Investment Partnership (TTIP), a proposed free trade agreement between the EU and US, that could be disasterous for public service and for UNISON members if the agreement goes through.

Part of the reason for this is that TTIP wants services to be opened up to competition, wants ‘harmonised’ regulations (which means getting rid of a lot of hard-won rights we enjoy in Europe) and wants an Investor-State Dispute Settlement (ISDS) incorporated into the agreement which gives corporations to right to sue goverments if their ‘interests’ are threatened.

This has already happened in Ecudor, and in Australia where tobacco giant, Philip Morris, are suing the government because plain cigarette packaging means they will sell less cigarattes which in turn harms their ‘interests’ (ie profits). If you want to know more watch this very short video http://youtu.be/f8F0UmbcSwg or listen to this interview  http://tinyurl.com/mah7vm5

FYI War on Want are planning a national tour and day of action on TTIP – check to see if there is one near you. http://tinyurl.com/pjceyzp

Rally and Reception
This year the rally and reception will take place on the same evening. The rally will start at 7pm on Monday evening in syndicate 3, followed by the reception at 8.30. Delegates will have an opportunity to hear about developments in Swaziland and Colombia as well as hearing about European-wide issues, all of which impact on us here. Dave Prentis will also address the rally. The guests and NEC international committee will attend the reception directly afterwards to chat to delegates.

Fringes
On Tuesday lunchtime there is a fringe on TTIP. Speakers include the general secretary of EPSU and Polly Jones who is now head of policy and campaigns at the World Development Movement..

There are also fringes on Cuba/Venezuela, Palestine (NEC member Helen Jenner will be speaking about her visit to Palestine) and Colombia over the course of the week.

Conference business
Before the international debate starts on Thursday morning, there will be a photo stunt (P&C for now)

Rosa Pavanelli, the general secretary of PSI, will address conference on Thursday morning as the international speaker.

There are also a number of international motions on the agenda including, TTIP, Colombia, Palestine and Bhopal.