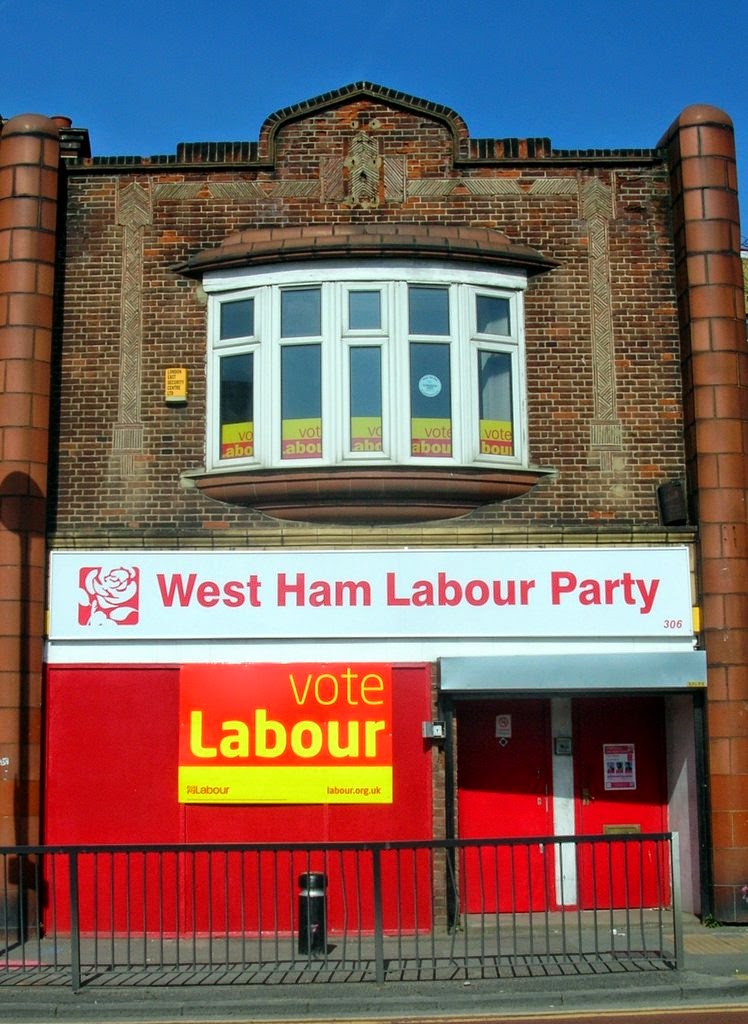 On Thursday evening there was the AGM of West Ham Constituency Labour Party (CLP) which took place at our headquarters in the High Street, Stratford, E15.

The meeting began a with a 2 minutes silence to mark the recent unexpected death of respected East Ham Councillor, Alec Kellaway.  I known Alec for many years and and had worked closely with him on the Council Investment and Accounts Committee.  He had always been very considerate and supportive. His death is a personal shock and a great loss to the Party. Council meetings will not be the same without his home baked cakes.

Due to a very previous wicked life, I was elected as Campaign Coordinator and Agent with Mas Patel as Assistant.

Obviously the next year will be dominated by the forthcoming General Election and the need to re-elect our excellent local MP, Lyn Brown. While it is vital to keep up with the energetic local campaigning and canvassing that we have carried out since 2010, we all know that unless Labour wins its national target seats next year, Newham will be stuffed by a return of Tory rule.

Therefore we have a duty to make sure that in West Ham we do our bit in the target seats that we have been asked by the Party to support. As our Secretary, Alan Griffith, reminded us on the night, we have only "45 weeks until the 7th May 2014 General Election". Let us by hard work and unity turn this statement into we have only "45 weeks to get rid of this rotten Tory led Government".

(Picture of our West Ham HQ during the General Election 2010 when I was also the Agent)
Posted by John Gray at Saturday, June 28, 2014

To the vile anonymous commentator who I have deleted I would suggest that you make an appointment with your GP as a matter of urgency and seek help.

Over the years, I have faced a variety of ASB issues.

I am angry right now, because I faced aggressive threats from the boyfriend of a single mother.

The property has been leased by Newham Council from a private landlord. I don't understand why Newham is leasing these houses in my neighbourhood.

The tenant is a single mother. I am not sure if the boyfriend lives permanently or not.

The boyfriend was shouting and aggressive threatening towards me. Some of the things he was saying were outlandish. He had an altered sense of reality.

It was by chance a couple of weeks, later, I bumped into the single mother, and I asked if everything was okay, as the police has turned up. She said someone called the police as a prank. I was glad no one was hurt, but wondered about the sort of friends they have who would do such a prank.

Then 3-4 weeks ago, Newham Law Enforcement were ringing my doorbell, because the single mother keeps leaving shopping trolleys outside. I did not answer the door. I did not want to get involved.

Some days later, I saw the single mother outside and I mentioned Newham Law Enforcement had been knocking on people's doors. I explained it was about the shopping trolley.

I have no idea what this single mother had told her boyfriend about these two encounters, but the boyfriend had twisted things out of all proportions in his mind. It occurred to me the boyfriend was a nutter.


Labour keep saying we need to build more social housing, but are these people deserving of it?

Fighting for the poor was right in the past, but in today's world, I have lost faith in Socialism.

This country gives people benefits automatically, but the system is flawed, because it expects nothing in return. Look at all the people who got involved in the London riots.

Why have groups of youths from housing associations been going on a rampage?


If poor people had to apply for benefits from their "local community". Like a charity award, then the poor would not be burning down their own communities, because they would recognise it is the community giving them the money. They would have to be good.

Because local people could say 'no you are not getting any money because you did this and that..'.

Those who get involved in ASB take the local community for granted. They put nothing into the community. If the system was based on an award, the poor would need to prove they deserve it. Then may be people might try to please the community and may be do volunteer work or do something to show they are an upstanding citizen.

I am certain, the years of ASB, which I have suffered would not have happened, because the parents of those youths, would tell their kids they have to behave.

Because the local community would have the power, there would be more respect. Crime and ASB would go down.

This situation must have been very nasty and unpleasant. I hope you have informed the Police.

But I don't understand why you want to stigmatise all Housing Association tenants as on benefits and thugs?

This is simply untrue. There are benefit cheats and thugs in Council housing, in private housing and in owner occupation.

Most people on housing benefit work very hard but don't earn enough to pay all their rent.

The Countries which have less crime, violence and ASB are those were there is less income inequality between the rich and poor.

This is the way to deal with crime not being bigoted about people on the bias of their housing tenure.

I am the victim here.

"I hope you have informed the Police."

Do you want me to end up in hospital?

"But I don't understand why you want to stigmatise all Housing Association tenants as on benefits and thugs? "

Never said ALL. Sure there are good people, but you never seem them. It is only the terrible ones who do these things.

I have formed my opinion of my experience of living Newham.

"This is simply untrue. There are benefit cheats and thugs in Council housing, in private housing and in owner occupation. "

I don't care about benefit cheats. I do care about people who do harm, threaten me.

"The Countries which have less crime, violence and ASB are those were there is less income inequality between the rich and poor."

Even though my father self-employed, we had a lot less money then people who were on benefits. According to your ideology, I should have ended up in crime.

Whilst the poor kids got free school dinners everyday, my parents could not afford it. The day I got a school meal was a real treat. A bit like Charlie and the Chocolate factory, find a coin to buy a chocolate bar. I strived to better myself.....

A few years ago, I had someone pee outside my door. He was the visitor of a neighbour who were having a birthday party. When I complained to my neighbour about their visitor. The neighbour saw nothing wrong in it and said to me "In Jamaica we p*** everywhere". The next few weeks the daughter took revenge and her mates threw eggs at my window.

Do you think putting £10,000 into their bank account would improve their manners?

You seem so worried about your pension. What about when you are too old to look after yourself?

Would you want the daughter of my neighbour to have a job in old people's home looking after you?

anon - if you are genuinely a victim you should contact the Police who in my experience will generally act in a sensitive and protective manner. I have over the years reported a number of incidents to the Police and the Council including giving evidence in Court and have never (touch wood) had a problem.

If our society was fairer there would be less crime and violence.

I'm sorry but I just don't believe you are genuine and you are yet another hateful, bigoted racist troll. Get a life please.