Sunday Night Live: 30 July 2016 Social Movements - The end of politics as we know it? 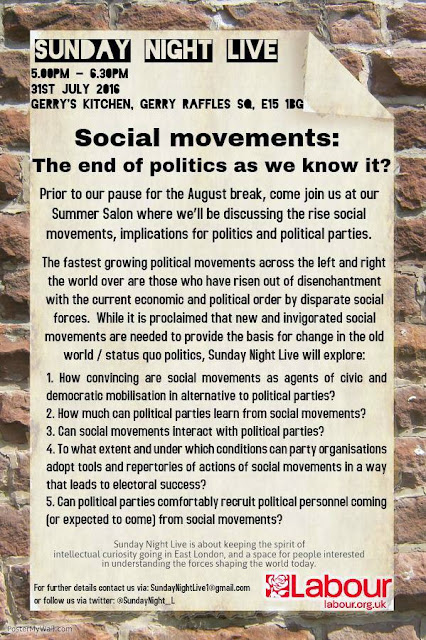 "Prior to our pause for the August break, come join us at our Sunday Night Live Summer Salon where we’ll be discussing the rise social movements, implications for politics and political parties.

The fastest growing political movements across the left and right the world over are those who have risen out of disenchantment with the current economic and political order by disparate social forces.
And if politics is a battle of social forces, political parties act as representatives of those forces. Just look at the success of Republican presidential hopeful Donald Trump, who tapped into the Tea Party movement; or Bernie Sanders whose movement has dragged the Democrats’ policy platform to the left and got Democratic rival Hillary Clinton to proclaim ‘your cause is our cause’ during her acceptance speech on Thursday.
Developments across Europe suggest there won’t be a return to business as usual anytime soon either. The schisms gripping the Labour Party since its membership voted for an anti-establishment left-wing leader last year has resulted in a leadership challenger who is trying to convince half a million party members that only he can take forward an anti-austerity agenda as an electoral winner based on a different kind of social movement - but the same politics.
We’ve also witnessed the UK Conservative Party making electoral in-roads with a superficial centrist agenda; the rise of Ukip which led to the UK voting to leave the EU; the fortunes of Syriza in Greece and Podemos in Spain twiddling against the face of popular criticism; and the rise of nationalists in Austria which has paralleled the upward trend in support for populist politicians across Europe’s core: France, Denmark, Sweden, the Netherlands, and now even Germany.
While it is proclaimed that new and invigorated social movements are needed to provide the basis for change in the old world / status quo politics, Sunday Night Live will explore:
So come join us for a relaxed evening of documentary viewing and discussion. Register here now and we look forward to seeing you!