#NoMandate - Back on the Campaign Trail 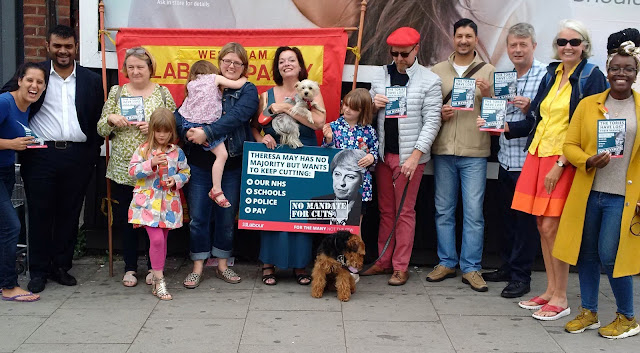 After a short break, members of Forest Gate North & West Ham Labour, led by our newly re-elected MP (with 77% of the vote) Lyn Brown, were back on the campaign trail today. As well as the NHS demo in Central London, today was a Labour Party National Campaign Day, on Theresa May, having "No Mandate for Cuts".

I love this picture above as well. We obviously tried to stage it as a political statement but forgot the adage "Never work with animals or children" :)

This was in the week that the Tories voted and cheered in Parliament on cutting yet again public sector pay,  while at the same time crying crocodile tears about the bravery of our Police, Fire & Ambulance service.

The Labour Party seems to be getting its act together with sending to local parties excellent anti cuts leaflets (with Labour Party membership forms on rear) and placards (even if they arrived let us say "just in time").

There was a superb response today in Forest Gate for Labour, including signing a petition about the Grenfell fire and making sure that the Council does everything possible to make things safe for residents.  There was also unusually in West Ham, a couple of angry Tories, up for a row, but we saw them off.

Before the stall, Lyn went to nearby Market Square to support the very first Forest GAYTE Pride. 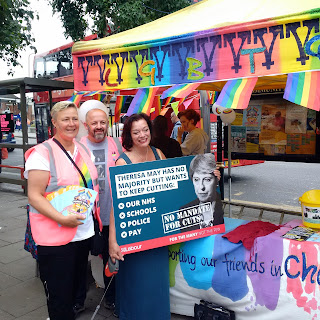