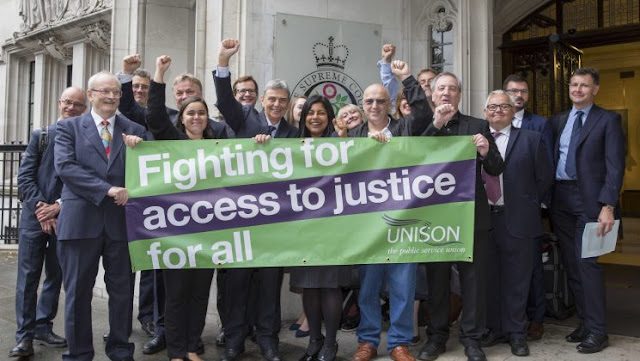 What a fantastic legal victory for UNISON and all British workers at the Supreme Court today. I must admit as a UNISON NEC member when we received reports on the 4 year legal battle which got turned down by the High Court and the Appeal Court that I was worried that we would lose and be liable for massive costs.

However,  today UNISON defeated the Government and they have been forced to scrap the (up to) £1200 fees for taking a case. The balance of power between the employer and the worker has dramatically shifted in one day.

While you cannot totally rely on employment tribunals for justice and security at work (for all our imperfections, you can only seek this from trade union membership) it is an important safety net.

Dodgy employers and bullying managers will think twice about the way they treat their staff since they will realise that their victims will no longer be priced out of seeking justice.

Of course, even if you don't have to pay massive fees, you still need trade union membership to pay for expert and professional legal advice and when appropriate, representation.


"Employment tribunal fees will be scrapped after UNISON won a landmark court victory against the government this morning.
The Supreme Court – the UK’s highest court – has unanimously ruled that the government was acting unlawfully and unconstitutionally when it introduced the fees four years ago.
From today, anyone who has been treated illegally or unfairly at work will no longer have to pay to take their employers to court – as a direct result of UNISON’s legal challenge.
The government will also have to refund more than £27m to the thousands of people charged for taking claims to tribunals  since July 2013, when fees were introduced by then Lord Chancellor Chris Grayling.
Anyone in England, Scotland and Wales wanting to pursue a case against their employer has had to find as much as £1,200. This has been a huge expense for many low-paid employees, says UNISON.
Reacting to this morning‘s decision, UNISON general secretary Dave Prentis said: “The government is not above the law. But when ministers introduced fees they were disregarding laws many centuries old, and showing little concern for employees seeking justice following illegal treatment at work.
Read the full Supreme Court judgement in
R (on the application of UNISON) v Lord Chancellor
“The government has been acting unlawfully, and has been proved wrong – not just on simple economics, but on constitutional law and basic fairness too.
“It’s a major victory for employees everywhere. UNISON took the case on behalf of anyone who’s ever been wronged at work, or who might be in future. Unscrupulous employers no longer have the upper hand.
“These unfair fees have let law-breaking bosses off the hook these past four years, and left badly treated staff with no choice but to put up or shut up.
“We’ll never know how many people missed out because they couldn’t afford the expense of fees. But at last this tax on justice has been lifted.”
UNISON assistant general secretary Bronwyn McKenna added: “The Supreme Court correctly criticised the government’s failure when it set the fees to consider the public benefits flowing from the enforcement of legal rights enacted by Parliament.
“The effective enforcement of these rights is fundamental to parliamentary democracy and integral to the development of UK law. UNISON’s case has helped clarify the law and gives certainty to citizens and businesses in their everyday lives.”
The decision marks the end of a four-year fight by UNISON to overturn the government’s introduction of fees. 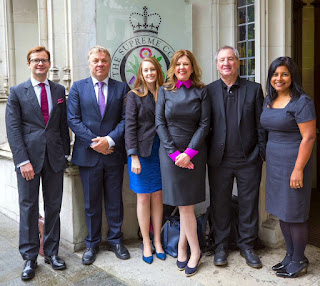