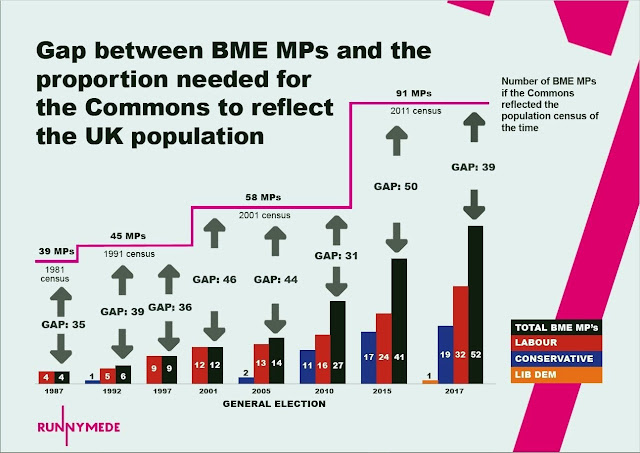 "Forum, we celebrate the increase in Black, disabled and women MP’s in the Labour party in the recent general election. For parliament to be effective and face the many challenges that lie in the months and years ahead, it needs to have diverse representation and people from all walks of life. Parliament is stronger when it reflects the society that it seeks to represent.

However there is a BUT here. Research from the Runnymede Trust carried out shortly after this election shows that 52 BME MP’s were elected across the house – however changing demographics within society mean that the gap of BME MP’s reflecting society is now the same as it was 25 years ago.

So effectively what is happening is that in 1987 when the 1st BME MP’s were elected, Diane Abbott, Keith Vaz, Bernie Grant and Paul Boateng, there was a 35% gap as to reflect society parliament should have had 39 BME MP’s.

However now although we have 53 BME MP’s which is an increase on previous years, there now is a higher gap of 39%, as to reflect the current makeup of society parliament should actually have 91 BME MP’s. So a lot has been done but there is still a lot to do.

We have seen the dramatic effect of all women’s shortlists, however very few black candidates come through this process. It was also disappointing that in this recent election and I say this as a Black woman that given the over-representation of Black men in the mental health and prison systems, not a single candidate from our party was a Black (African/Caribbean) man. Black men need role models too.

So forum lets explore the options and work together to increase Black representation across public life".
Posted by John Gray at Sunday, July 23, 2017