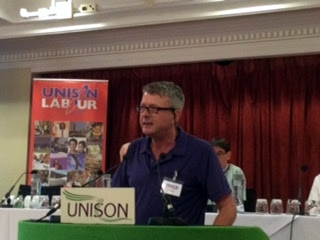 John Gray, speaking on behalf of your National Labour Link Committee in favour of motion 11 (similar)  "Why we need to build a new housing consensus for affordable and decent homes for all"
as amended.

"Chair, Forum, In 1945 General election campaign, that took place after the end of the second world war, the wartime Tory Prime Minister, Winston Churchill, was shouted down  at a rally in East London by crowds who demanded a mass house building programme.

The failure by the Tories to convince the public that they would build enough homes at an affordable rent was one of the reasons for the shock Labour victory.

For the next 34 years the Tories had learnt their lesson about the importance of housing and there was a national consensus all political parties competed with Labour at every local and national election on who could provide the most homes and the cheapest rents.

Then in 1979 Margaret Thatcher was elected and the Tories began dismantling public housing, destroying the consensus by divide and rule - and denying millions of people their basic human right to a home.

The Tories 38 year strategy of dismantling public housing has been the biggest privatisation in this country’s history.

The Right to Buy was misnamed from the start – it was a Right to a Discount – and 38 years on, we find that huge numbers of the homes that have been sold and not replaced.

Today, there are 1.5 million fewer homes available for a rent, that people on low incomes can afford, than there was 38 years ago - and the population has grown dramatically since.

Forum, like many of you here today, I work in housing and my substantive job is as a housing officer of a large estate in the east end of London with 7 tower blocks.

Let us never forget that this attack on the provision of public housing is the reason why there were so many families with young children, disabled and elderly residents on the 18th floor of a tower block.

The scandal that surrounds the Grenfell House tragedy lies not just in the repeated failure of government to listen to and act on the advice they received but in the Conservative political mantra that all regulations are just "elf & safety" and therefore ‘bad’.

Forum, the general election campaign changed the public debate on housing and other key issues in this country. The tide of public opinion is turning. this motion provides the basis for UNISON to play its role in ending the dismantling of public housing and beginning a new era of providing quality, safe council and housing association homes with good space standards at rents people can actually afford.

UPDATE: with regard to shock 1945 election result see this fascinating article.
Posted by John Gray at Sunday, July 16, 2017