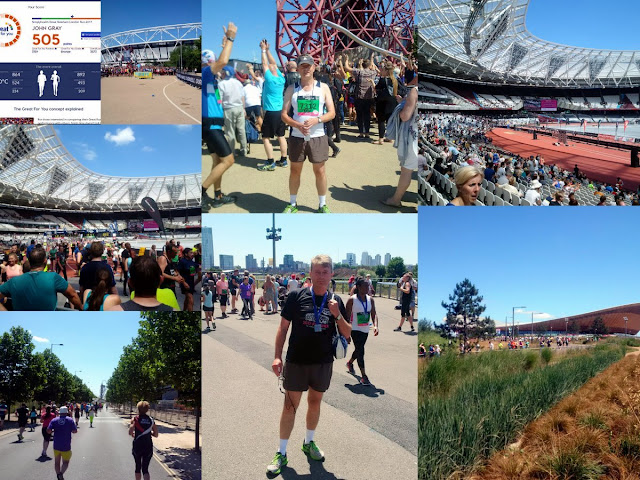 Before (top middle) and after (bottom middle) picture of me taking part in the Newham Great Run (wearing finishing tee shirt and medal)  I will admit to have forgotten that I had entered and due to the General election and UNISON conference, I had not trained specifically for the this run until last week.  Yet I was only 32 seconds slower than last year, when I did train (and training for a triathlon!)

My legs are very sore due to the lack of training and I suspect that I will suffer tomorrow morning.

This was a great run. It was hot but there was a lovely breeze, which I think saved the day. I did not see any runners collapsed on the side of the road which I think is a first for any of the Newham runs I have entered in the last few years.

Some working class history on route is that we ran past what I think is the site of the Chobham Farm container depot, where in 1972 an "unlawful" trade union picket took place which resulted in the imprisonment of 5 London dock workers including Vic Turner, who later on became the Mayor of Newham Council.

This imprisonment resulted in a largely successful General Strike, which led to the Pentonville 5 dockers being released. I have been pushing for a plaque to remember this.