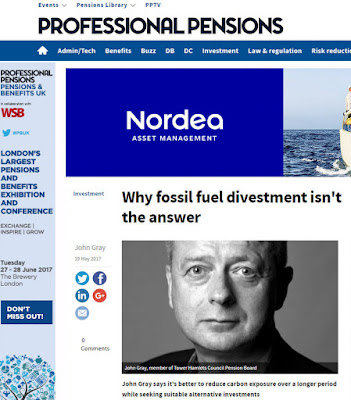 Last month I went to a well attended public meeting on this topic in Forest Gate Coffee7 and a Chatham House rules seminar in the City. This article today in Professional Pensions reflects what I think and said at those meetings.

I am sure that many pension trustees will have been approached by both beneficiaries and climate change activists concerned about investments in fossil fuel industries. In local government the pension funds are often seen as belonging to the council so residents are also lobbying councillors and pension board members about divesting from carbon.

‎Like so many things about pensions, this topic is important but complex and definitely in the 'difficult box'. From my perspective as a councillor on one Local Government Pension Scheme (LGPS) and as a union-appointed pension board member on another, I firstly try to make it clear that local government pension funds belong to its active members, its deferred members, its pensioners and dependents. Not to the council and definitely not to councillors.
The fund must be invested in the interests of beneficiaries.
Secondly, unlike in the private sector, there is no Pension Protection Fund for the LGPS nor does it have an explicit crown promise like other public sector schemes.
While it may be unthinkable for many good reasons to imagine an LGPS fund going bust, trustees and those responsible for pensions have to think the unthinkable and in reality, who really knows what will happen in the long term? Due to the LGPS employer contribution cap, if future pension cost is more than 13% then either staff will have to pay more or benefits will be reduced.
What campaigners, who are rightly deeply concerned about the risk of climate change, should be doing is not just lobbying councillors and their officers, but building links and engaging with council staff and their trade unions. It is after all their deferred pay, their pension future, their money.
This doesn't mean that council pension funds should not be examining both the real financial risks ‎of investing in carbon industries but also be conscious of the impending Armageddon of our planet if we do not control our carbon emissions.
Existing investments in carbon are usually valued on the basis of their proven reserves of coal, oil or gas. It is becoming clear that much of these reserves may never be mined or pumped out, since if they were to do so it would burn the planet. These so called 'stranded assets' are therefore likely to destroy the value of investments in carbon industries.
While to me the case for disinvestment in carbon is unanswerable, I do not feel divestment is the answer. Many calls for divestment want pension funds to sell all their carbon investments within five years. Disinvestment is a call to reduce exposure to carbon over a longer period while seeking suitable alternative investments.
It is probable that the use of fossil fuels will continue but hopefully we will see a significant reduction. It is arguable that at this time there are not sufficient alternative 'green' energy investment opportunities available. This will change but when?
I also feel tactically that calling for the divestment rather than disinvestment from carbon will play into the hands of climate change and other ESG sceptics in the industry, who would relish the opportunity to attack and rubbish total divestment, when they know that the case for disinvestment over time is so powerful.
Do not underestimate the resistance to such change in the industry. While there is much good practice, many professional practitioners may 'talk the talk' on climate change issues but are in reality 'greenwashing'. Beware!
John Gray is a member of Tower Hamlets Council Pension Board, writing in a personal capacity
Posted by John Gray at Friday, May 19, 2017