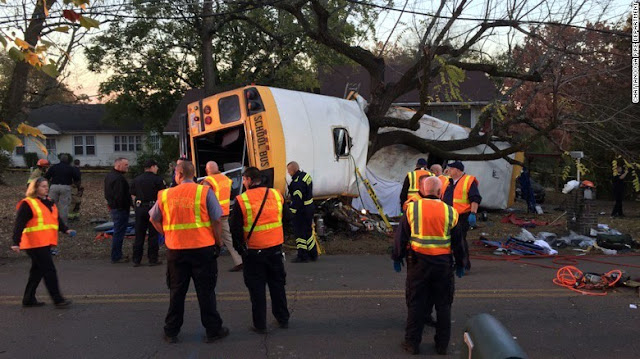 A sensitive and thoughtful commentary below by Tom Powdrill on his blog "Labour & Capital" about the many governance dangers of paying huge "performance related" bonuses to Chief Executives.

National Express of course has been warned on numerous occasions on this blog and others about the dire health & culture in its USA school bus arm.

Did the CEO of National Express actually do anything about this?

No wonder so many people in the UK and the USA hate the "establishment" and vote for extremist politics.

"I've blogged about National Express a few times over the years, mainly in relation to its anti-union activity. But today a story in the FT about its executive pay arrangements caught my eye. I think it's a great example of why performance-related pay is a colossal waste of time, including trying to tie pay to ESG targets.

As many people may know, there was a tragic accident in the company's US school bus business last year in which six young children died. This is clearly pretty much the worst safety outcome a company that transports children can have.

Understandably, therefore, the company has reduced to zero the amount of the chief executive's bonus that is tied to safety. But, he's still going to get the rest of the bonus, which equates to over 150% of salary. Some shareholders are ticked off, and think that the company should not have paid any bonus at all, sensing that a chief executive getting a seven figure bonus in the year when the company suffered multiple child fatalities is not a good look.

To me, this sort of outcome is the inevitable outcome of the performance-related pay delusion. If you set multiple targets for variable pay you are always going to get these kinds of perverse outcomes. If you've hit your financial targets but there have been fatalities then simply not awarding the bits of pay tied to ESG criteria is logically what you should do. But it looks appalling. Applying some common sense has its own problems - for people within business/finance at least. If you scrap the bonus entirely (which is what I think they should have done) then it makes plain what a joke the system is - it is incapable of delivering sensible outcomes.

This isn't the first time this has happened in relation to fatalities involving a PLC. The CEO of Thomas Cook got in a similar mess by giving up some, but not all of her share award. To try and stick to a logical/statistical approach merely invites the question "so how many people would have to die before you didn't take any bonus/share award?". Companies - or investors - that simply hide behind the incentive design look inhumane.

There was a similar example with News Corp when the hacking scandal blew up - with James and (I think) Rupert Murdoch agreeing to give up some, but not all, of their bonuses. And, more generally, when there is a lag between performance and reward (because shareholders have asked that reward be tied to slightly more long-term performance) you get examples when exec awards vest despite performance having subsequently turned bad again.

I know I am well out of step with many ESG people here, but to me the fundamental problem is the insistence on performance-related pay. Quite aside from motivational issues, perverse incentives and the whole question of why the most highly paid need or deserve further incentives to get them to do their job, performance pay generates these ridiculous outcomes. They make sense according to the text book internal logic of incentive schemes but they look terrible to any half conscious actual human being. Instead of wasting even more time trying to tie ESG criteria to pay we should be scaling back variable reward if not scrapping it altogether.
Posted by John Gray at Friday, May 12, 2017